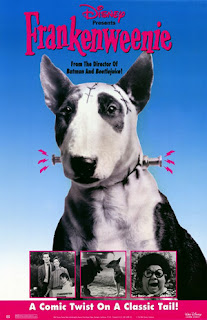 SHORT/SCI-FI/COMEDY with elements of horror

Back in 1984, Tim Burton made a delightful little film short entitled, Frankenweenie, for Disney. Disney didn’t like the offbeat story and refused to release the film. However, after Burton had a hit film with Beetle Juice and landed the gig to direct Batman (1989), Disney released the film on videocassette in the late 80’s.

The film retells the Frankenstein story from a child’s perspective with gentle humor and simplicity. When his pet dog Sparky is hit and killed by a car, Victor Frankenstein (Barret Oliver) revives Sparky Frankenstein-style using electricity. While Victor’s parents Susan (Shelley Duval) and Ben (Daniel Stern) slowly come to accept the resurrected Sparky, the neighbors aren’t so cool with it. The chase Sparky to miniature golf course where Sparky becomes a tragic hero, but can he come back again?

In Frankenweenie, Burton reveals his whimsical gothic style and his penchant for putting the unusual, the weird, and the bizarre in a suburban setting, a theme he’s revisited several times. The black and white photography and Victor’s neighborhood, which the photography turns into a “Leave it to Beaver” wonderland, are a nice fit for this gentle tale about a boy and his dog. Frankenweenie is nowhere near as good as Burton’s great films, but it is a nice and charming little oddity-lite.