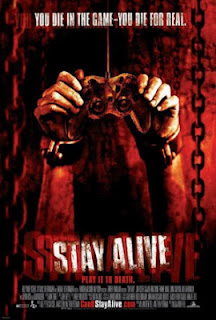 The subject of this movie review is Stay Alive, a 2006 horror film released by Hollywood Pictures, a Walt Disney Pictures production label. The film is directed by William Brent Bell, and McG (who directed the Charlie’s Angels films) is one of the film’s producers. Stay Alive follows a group of teens who enter the world of an online video game in order to solve the mystery of their friend’s death.

After the mysterious and brutal murder of his childhood best friend, Loomis Crowley (Milo Ventimiglia), Hutch MacNeil (Jon Foster) inherits “Stay Alive,” a test copy of a next generation, first person shooter, horror survival game that Loomis had. The game is based on the true story (only in the movie) of “The Blood Countess,” an 18th century New Orleans noblewoman who ran a boarding school for girls. It was later discovered that the countess was a witch and that she would torture and murder her students.

Hutch gathers a group of friends and fellow gamers to play Stay Alive, but they don’t know anything about the game other than that they shouldn’t have this test copy. Soon after playing the grisly game, Hutch and his friends discover a chilling connection: they are being murdered one-by-one by the same method by which the characters they play are murdered in Stay Alive. In fact, the game has blurred the line between the real world and the world of Stay Alive. Now, the gamers must unravel the mystery of The Blood Countess to defeat her because that’s the only way they are going to stay alive.

The advertising campaign for the new horror film, Stay Alive, suggests that the movie is a gruesome horror show about a gang of youngsters playing an equally gruesome horror video game. In order to get a “PG-13” rating, the filmmakers toned down what should be the goriest scenes, or perhaps the gore exists and will show up in an “unrated” DVD release. However, what does exist on film is quite good. Stay Alive is a goofy, fun horror flick that is way too unsettling and creepy at time. Director William Brent Bell has even mastered the jump-out-at-you tricks.

The film doesn’t really go into the gaming sub-culture, which is disappointing. The characters are contrived and hackneyed (I did like Frankie Muniz’s Swink Sylvania), and the plot has some holes. Still, this is a better video game movie than the mediocre adaptation of a real first person shooter game, Doom. The gaming sequences are convincing, and I certainly wanted to be in the game with Hutch and his friends. The sound effects and computer animated ghosts mixed with the idea of the supernatural creeping through our electronic entertainment makes this film kind of like an American version of such recent Japanese horror films as Ringu or Pulse. It also gives a nod to such apocalyptic scary movies as In the Mouth of Madness and Season of the Witch and video games like Resident Evil and Silent Hill.

In the final analysis, Stay Alive is a fun “gotcha” horror flick that combines the typical elements of a slasher film that has a supernatural boogieman (such as Halloween), and those are a youthful cast as the victims, a merciless killer, and lots of bumps in the night. In that case, Stay Alive is not as good as the best of that horror sub-genre, but it’s still good.