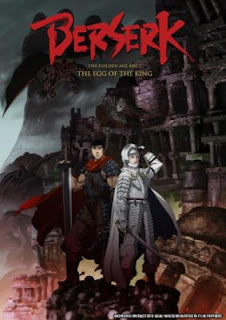 VIZ MEDIA PREMIERES BERSERK: THE GOLDEN AGE ARC I – THE EGG OF THE KING THIS SUNDAY ON NEON ALLEY

Don’t miss the visceral clash of arms and armor as VIZ Media premieres BERSERK: THE GOLDEN AGE ARC I – THE EGG OF THE KING exclusively on Neon Alley this Sunday, October 28th at 8:00pm EST / 5:00pm PST. The highly anticipated anime film repeats at 12:00am EST / 8:00pm PST, and will air again throughout the week.

Neon Alley is VIZ Media’s new 24-hour anime channel featuring the world’s best titles (dubbed in English and uncut). For a limited time only, the subscription-based service is offering a one-week free trial, available for fans who sign up at NeonAlley.com.

Combining a foreboding medieval European-inspired setting with fantasy and exquisitely detailed swordsmanship, BERSERK: THE GOLDEN AGE ARC I – THE EGG OF THE KING follows lone mercenary, Guts, as he travels a land where a hundred-year-old war is taking place. His ferocity and ability to kill enemies attracts the attention of Griffith, leader of the mercenary group “The Band of the Hawk,” and Guts is recruited to the unit. Thanks to their continued victories on the battlefield, the bond between Guts and Griffith deepens, but despite all their success, Guts begins to question his reasons for fighting for Griffith’s dream. Unknown to Guts, this unyielding dream is about to bestow a horrible fate on them both.

BERSERK: THE Golden Age Arc film trilogy was produced in Japan by Studio 4ºC and is based on the bestselling medieval dark fantasy manga (graphic novel) series created by Kentaro Miura.

For more information on the BERSERK: THE GOLDEN AGE ARC film trilogy, please visit the official Facebook page at: www.facebook.com/BerserkFilm.

For more information on Neon Alley and to register for updates, please visit NeonAlley.com.