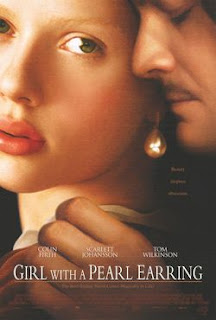 Girl with a Pearl Earring is a speculative account of the story behind the Johannes Vermeer painting of the same title. Set in 17th century Holland, the film revolves around Griet (Scarlett Johansson), a peasant girl who is forced to work in the household of the master painter Vermeer (Colin Firth) as a housemaid to his numerous children. Curious about art and painting, Griet draws the attention of the painter who soon teaches her to mix and grind his paint and fetch colors from market. Griet’s beauty also attracts the eye of Vermeer’s lustful patron, Van Ruijven (Tom Wilkinson), and Van Ruijven coerces Vermeer into painting a commission for his private chamber: the subject – Griet. Tensions arise, however, when Vermeer’s wife suspects intimacy between her servant and her husband. Yeah, but just wait until home girl sees that fabulous canvas her man painted with Griet as both muse and subject.

Peter Webber’s film earned Oscar® nominations (Best Art Direction-Set Decoration, Best Cinematography, and Best Costume Design), and all of them are well deserved. Girl with a Pearl Earring is one of the most beautiful films I’ve seen since the mid-90’s sumptuous fest, Restoration. Webber, ably assisted by his master film photographer Eduardo Serra, frames many of the film’s shots as if they were individual works of art by Vermeer. In fact, the film is like a flipbook of paintings in Vermeer’s style, so accurately does the film capture the look and feel of the artist famous for his beautiful paintings capturing the daily life of domestics and servants.

Not only is the film good to look at, the film is also simply a superbly made drama. Ms. Johansson continues to prove that she is talented young actress. She has relatively little dialogue in the film, but she carries the movie by giving a performance that must be visually interpreted if one is to see into her character. True movie lovers appreciate when a performer can silently establish mood, character, and story so well. Although she won a Golden Globe nomination, the Academy was not forthcoming with an Oscar® nomination. It’s up to us to honor such a performance as if it had been so acclaimed with awards.