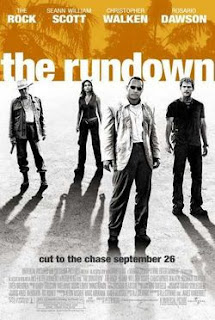 Early in The Rundown, Arnold Schwarzenegger makes a cameo appearance in which he tells The Rock/Dwayne Johnson’s character to have fun. It’s an unofficial passing of the torch from one veteran comic book action hero to the new guy who just may be at the head of the class of the next generation of action heroes. It an appropriate meeting of the rippling bods because The Rundown is the kind of over the top action movie that is just as much fun to watch as classic Ah-nold cinema.

In The Rundown, Beck (The Rock) specializes in finding people who owe money to the wrong kind of people or who run away from an obligation. His latest assignment (and he hopes his last) is to find Travis (Seann William Scott), an irresponsible rich kid who owes a terrible debt to his father. Travis is hiding in small isolated town in the Amazon where he is searching for that one big treasure that will make his fortune and reputation as a treasure hunter. Beck’s arrival attracts the unwanted attention of Hatcher (Christopher Walken), a local despot, who begins a small war against Beck and Travis to obtain Travis’ treasure.

Director Peter Berg (who is also an actor) does an excellent job playing up the personality quirks that make his cast so popular, but he also gives The Rock and Scott a new twist on their respective shticks. The Rock has some gloriously brutal fight scenes that combine the style of professional wrestling with a hyper realistic video game version of wrestling. Berg, however, lets The Rock show a more human, thoughtful, and intelligent side; he’s less like the cartoonish gladiator of WWE and more like the determined warrior of his earlier movie hit, The Scorpion King. Seann Scott also shines as something more than the one-note joke for which he is best known in the American Pie movies; he’s a funny and wacky idiot when the moment calls for laughs, but he’s also a gritty, stand up guy tailor made to play the buddy movie sidekick.

The Rundown is a very good action movie and a lot of fun to watch because of its fair amount of humor. The fights scenes (two in particular, one in the beginning and one in the middle, are nearly as mind bending as anything in The Matrix) are fabulous, breathtaking, and really make the movie. The gun fights and explosions are fairly typical of big budget film productions and only detract from the movie. Christopher Walken and Rosario Dawson’s characters are little more than barnacles, and Walken is himself rapidly becoming a stock character. Still, in the end, all hail The Rock; it really does seem as if a movie star is born.

Posted by Leroy Douresseaux at 3:53 PM