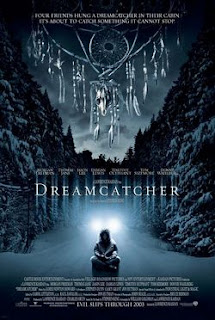 HORRO/SCI-FI with elements of a thriller

That said, I continue to fail to understand why Stephen King allows his novels to be turned into films. The heart of a King novel are the characters, especially the relationship between characters. The supernatural element, usually something horrific, is part of the characters’ environment, but how the characters deal with the supernatural allows us to see into them and usually depth of characterization is more interesting than the supernatural horror. As frightening as the horror was in a novel like Pet Sematery, the really scary crap, the true intensity in that story, was the interpersonal and familial relationships. Getting to see what was behind the closed doors and inside people’s head was a heck of a lot more frightening than the angry dead. The film adaptation of that novel, which was enough of a minor hit to call for a sequel, completely missed that point.

So while watching Lawrence Kasdan’s Dreamcatcher, I pretty much figured that while Kasdan and co-adaptor screenwriter William Goldman may have got the point of King’s Dreamcatcher, they did what most everyone who has adapted King to film have done: drop some characters and character points and favor the boogey men. I haven’t yet read Dreamcatcher, but I assume that the relationship between the four lead characters in the book is something spectacular. The movie only hints at the depth of their relationship; indeed, the viewer has to assume that these men are close.

Dr. Henry Devlin (Thomas Jane), Joe “Beaver” Clarendon (Jason Lee), Gary “Jonesy” Jones (Damian Lewis), and Pete Moore (Tom Olyphant) are four troubled friends who reunite for a camping trip. They’re all still affected by their relationship with Douglas Clavell (Donnie Wahlberg), a strange, seemingly handicapped child they saved 20 years earlier. That boy, whom they named Duddits, weighs heavily on their minds during their trip. Strange things begin to happen when the friends, in separate pairs, encounter lost hunters in the snow bound Maine woods. As a vicious snow storm sets in, a strange and unknown menace stalks the forest. Meanwhile, a military force led by a dangerous commander (Morgan Freeman) has closed off the area because of an alleged contagion, and the friend’s only hope may be an independent thinking soldier (Tom Sizemore).

Dreamcatcher summons up the ghosts of others “King” films and television movies, including Stand by Me and It. Most of all, Dreamcatcher the movie is a re-imagining and de facto remake of John Carpenter’s superb (and almost lost) film The Thing, but Dreamcatcher lacks Carpenter’s film’s intensity and eye popping gore. The first half hour of set up does intrigue, creating anticipation and whetting the appetite for hot supernatural action. It is somewhat stunted and clumsy in that you can pretty much figure out that the film is trying to tell us a lot, but doesn’t have the time to tell us in detail, so all we’re left with is vagueness.

When the crap does hit the fan – the scary stuff starts to happen, Dreamcatcher delivers the chills and thrills quite well. I was literally on the edge of my seat, and I was certain I could feel my heart racing and stopping with each new bump and chill. The film gives a good scare for quite a while, but as the film heads towards the homestretch, the sci-fi element unravels just enough to hamstring the film.

Because the acting is good and some of my favorite actors are in the film made watching Dreamcatcher fairly pleasant. Thomas (Deep Blue Sea and The Sweetest Thing) is a star in the making. I don’t think that he has the action movie chops of say Bruce Willis. I think his forte will probably be to play the leading man in comedies and dramas, but whenever he’s on the screen, I think the viewer naturally gravitates towards his character. Tom Sizemore continues to be the solid supporting guy, and Freeman, one of the best American actors of the last fifteen years, can play a really cool nasty guy. And when you see Donnie Wahlberg’s name in the credits, you still won’t believe it’s him.

Dreamcatcher is by no means a great thriller. However, sometimes it’s very good, and for a long time, it delivers some fairly effective chills, and that is good enough. The characters are engaging, and the creatures, except for a few moments of looking ridiculous, are pretty scary and threatening. Yeah, I think Carpenter’s aforementioned The Thing is a better and more satisfying version of this story, but Dreamcatcher, imperfect as it is, has enough good moments to make it a fairly decent thriller, worth watching if you like the scary stuff.

Posted by Leroy Douresseaux at 5:53 AM