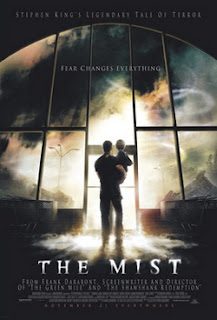 HORROR/DRAMA with elements of sci-fi

Writer/director Frank Darabont has previously adapted two Stephen King works of fiction into movies: the multiple Oscar-nominated films, The Shawshank Redemption and The Green Mile. His latest King-to-film work is the horror flick, Stephen King’s The Mist, and it’s the kind of horror film that will still be on your mind quite a while after you leave the theatre, if not for a good long time afterwards.

The setting of The Mist is a pretty, Maine village populated by simple, rustic folks, but it is also the home of wealthy New Yorkers seeking a pastoral refuge from the hustle and bustle of the city life that has done well by them. Following a violent thunderstorm, a peculiar white mist creeps towards the small town community. Artist David Drayton (Thomas Jane) and his son, Billy (Nathan Gamble), are getting emergency supplies at a grocery store in the local shopping center when this unnatural mist moves in to cover the entire area.

Unusual as the mist is, the store’s occupants soon discover that there may be something monstrous prowling inside the thick, white mess. The customers barricade themselves inside the grocery story, and Drayton and a small band of customers plot survival and eventually escape after creatures in the mist start attacking the store. However, Drayton and company soon find themselves in a test of wills and a small war with Mrs. Carmody (Marcia Gay Harden), a local self-proclaimed psychic, who insists that only a blood sacrifice to the “God of Israel” will save them all. Her congregation of fear, formed out of the customers who have fallen under her sway, is all too willing to kill for her. Then, there’s the enemy outside that they can’t even see and that is attacking with increasing frequency.

The Mist, the film, is like “The Mist, the novella upon which is based (and which first appeared in the 1980 horror fiction anthology, Dark Forces), is about more about the conflicts among the occupants of the grocery store than it is about the supernatural boogeymen waiting in the mist outside. The monsters certainly are terrifying, even when their CGI creators make them look somewhat comical, perhaps, because Darabont maintained an element about which King was clear in the original story – these beasts hiding in that thick, mean mist are so very lethal. Their constant attacks on the grocery store’s structural integrity make this slightly two-hour-plus film actually seem lean, mean, and spry.

However, Darabont captures the most delicious aspect of King’s story and transforms his film from yet-another-King-adaptation into something memorable – a brutish and shockingly pessimistic human drama. Darabont suggests that the humans are just as capable of being killers as the creatures outside are. What can bring about the change? It’s fear, because as the movie’s tagline says – “Fear changes everything.”

All the mist does is quickly peel back the thin veneer of civility and civilization to reveal the ugly side of people just waiting to show itself the first time the comforts of modern life – utilities and machines – stop working. Whether it is the hellfire, hellfire, and more hellfire with a side of brimstone Mrs. Carmody and her demands for expiation (making amends to God via blood sacrifice) or Andre Braugher’s loud-mouthed NYC attorney, many of the characters take their fears and insecurities and use that to separate the customers into two groups, “them” and “us.”

The only thing really disappointing about the movie (well, besides the really downer of an ending) is not the execution of the movie. It is the fact that when a disaster, natural or supernatural, starts to break down institutions like the family, local authority, community bonds, etc., then, many of us will act pretty much the way the characters in this gem of a horror flick do  And that's not the movie's fault, is it?

Posted by Leroy Douresseaux at 11:35 AM