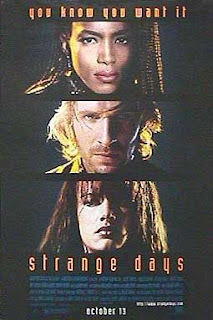 Set in a quasi-futuristic or near future Los Angeles on the eve of the new millennium, Strange Days was, at the time, director Kathryn Bigelow’s most ambitious film. This is especially true from the technical and production standpoints, as special cameras were designed to shoot the film and filming certain sequences required complex production planning. Bigelow also collaborated on Strange Days with her then-former husband James Cameron (they were married from 1989-91) who wrote the film’s story, co-wrote the screenplay, co-produced the film, and edited the film’s final cut (although he didn’t receive a screen credit as an editor because he wasn’t at the time a member of the film editors guild).

This neo-noir thriller opens on Dec. 30, 1999 and introduces ex-cop, Lenny Nero (Ralph Fiennes). Lenny is a pusher of illegal virtual reality clips. This potent technology records everything a person experiences on a small disc. Later, a special player sends a signal straight into the cerebral cortex of the brain and allows the wearer to relive those sensations. Of course, recordings of sex, murder, and violence are the most popular clips. When Lenny gets a clip that captured the murder of Jeriko One (Glenn Plummer), a high-profile rap musician and anti-government activist, he finds himself ensnared in a manhunt in which he can never be sure of the hunters’ identities. With the help of Lornette “Mace” Mason (Angela Bassett) an old friend and limo driver who is quite the fighter, Lenny tries to stay ahead of the danger and protect his old girlfriend, Faith Justin (Juliette Lewis), a musician who is somehow part of this. All the while, Lenny is trying to figure out what to do with a clip that could ignite the power keg that is Los Angeles on the eve of the year 2000 and set a fire that won’t stop burning.

Strange Days is a top-notch sci-fi drama, and it starts off with a good script and concept, for most of which visionary filmmaker James Cameron (The Terminator, Titanic) is responsible. This was also the film in which Kathryn Bigelow’s potential paid off quite nicely. Her choice of filmmaking genres likely surprised people early in a career, but this movie shows that she is more than capable of mounting a big production and controlling it. She maintains the integrity of Cameron’s vision, while visualizing it with consummate skill. She presents Strange Days as a plausible quasi-future and presents a frame of reference the audience can recognize. While Cameron’s stories have generally dealt with a strong action heroine or woman who can move to action, Bigelow emphasized gender stereotypes and portrayed the male, Lenny Nero, especially weak and enormously dependent upon the female, Lornette “Mace” Mason, who doesn’t back down or take prisoners in a fight.

There are good performances all around, in particularly Ralph Fiennes and Angela Bassett. In Lenny Nero, Fiennes defines the noble criminal, a slick huckster constantly fending off his conscience. Bassett is a heavyweight, breathing life into Mace Mason, as she reveals so much about her in a subtle fashion. She helps us discover one side of Mace so quietly that it’s surprising to realize that by the middle of the film, we know Mace as well as we know Lenny. Then, Bassett will explode in a flurry of punches and whip out a pistol, and we’re looking at Mace as an entirely different person.

Looking back on Strange Days, Cameron’s script seems slightly prophetic and may yet reveal a few more prophecies. In the end, however, Bigelow guides her cast, in particularly her stellar leads, and creative crew into creating a vision of the future that wallows in the excesses of our present, showing us how social ills will likely get worse. Then, Bigelow tells us that the future promises hope and brings out the best of those who want to show their best.