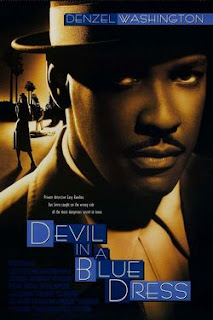 It’s Los Angeles, 1948. World War II vet Ezekiel “Easy” Rawlins (Denzel Washington) is out of work and needing money because he owns his home (one of the few black men to do so in the post WW II black neighborhoods of L.A.), and the mortgage is due… now. Through a friend, he connects with a shady white man named DeWitt Albright (Tom Sizemore), who pays Easy 100 dollars to find a missing white woman named Daphne Monet (Jennifer Beals). It seems like an easy way to make quick cash, but Easy gets more than he bargained for when people connected to Daphne start turning up dead. With the cops breathing down his neck, Easy turns to his old Houston, Texas running mate Raymond Alexander aka “Mouse” (Don Cheadle), a trigger happy hood who will definitely have Easy’s back. However, Mouse is sometimes as hazardous to Easy as the Daphne and the men looking for her are always dangerous to him.

When Devil in a Blue Dress debuted in 1995, the film seemed like a sure thing, both at the box office and with critics. Writer/director Carl Franklin had earned attention with his brutal and gritty neo-noir crime thriller, One False Move (1992). The film was based upon Walter Mosley’s “Easy” Rawlins detective novel series that was getting a lot of notice because its lead was African-American, a rarity in detective fiction. The series was also growing in popularity and book sales, especially with the release of a fourth book in the series in late 1994. Playing Easy was Denzel Washington, an actor hitting a career stride with three Oscar nominations (and one win) and box office success. Although the film met with many good reviews, Devil in a Blue Dress never quite caught on, and today is overshadowed, as far as modern Film-Noir-like movies go, by L.A. Confidential, which showed up two years later after the release of Devin in a Blue Dress.

Franklin’s adaptation of the novel by Walter Mosley fails to capture the ambiance and impressions of post-war L.A. – certainly not the way Mosley succeeds in creating this wonderful gumbo of Black folks and Black subcultures. Franklin and the production staff do a fine job recreating the L.A. of that time period, but it sometimes feels empty and flat – like a set for a stage drama. Franklin transforms the novel’s plot into something resembling Chinatown or Out of the Past. It doesn’t take a genius movie fan to figure out that Daphne Monet knows something that can hurt a rich and powerful person. And that person wants her found before his enemies get a hold of her and the dangerous info she possesses. Because of such a familiar plot, Devil in a Blue Dress the movie must rely on its characters and the actors playing them to be a compelling film.

The film is nearly a half hour into the narrative when the performances and the characters begin to thaw. Denzel really starts to fit comfortably in Easy’s skin, and Tom Sizemore sinks deep in DeWitt Albright’s wickedness. The movie really blossoms when Don Cheadle steps in as Easy’s old homeboy, Mouse. In the books, Mouse is a cold-blooded killer who will murder a man for a minor insult as easily as he’d murder a man for trying to kill him. Even Mouse’s playfulness only makes him come across as a mild-tempered rattlesnake, and Cheadle superbly captures that essence of the character and puts it on the screen. This brilliant and captivating small supporting role caught many by surprise, but Oscars ignored it. Jennifer Beals takes almost the entirety of the film before her character comes alive. Ms. Beals’ best scenes are the ones in which Daphne deals with her true identity – familiar territory for Ms. Beals perhaps?