Jonah Hex: Not Really THAT Bad 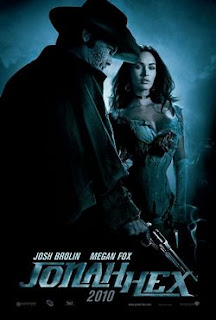 WESTERN/ACTION with elements of horror

Jonah Hex is a recent Western, released by Warner Bros. Pictures this past June. The title character, Jonah Hex, is one of DC Comics’ Western characters, and this anti-hero type is a bounty hunter whose face is horribly scarred on the right side. Created by writer John Albano and artist Tony DeZuniga, Jonah Hex made his first appearance in the early 1970s.

During the American Civil War, Jonah Hex (Josh Brolin) fought for the Confederacy. However, Hex turned against his commanding officer, Quentin Turnbull (John Malkovich), after Turnbull ordered him to burn down a hospital. After the war, a vengeful Turnbull killed Hex’s wife and son and branded his initials into Hex’s face.

Most of the movie takes place in 1876. As the country prepares for the Centennial celebration, Turnbull plots a July 4th terrorist attack using a devastating super weapon, an attack he believes will topple the American government and destroy the nation. President Grant (Aidan Quinn) orders the U.S. military to find Jonah Hex, who has many warrants on his head, and make him an offer he can’t refuse. In exchange for his freedom (and some cash), Hex must stop Turnbull. Hex, who can temporarily resurrect and communicate with the dead, uses all his talents and an array of firearms to fight his way through Turnbull’s men. Hex also gets help from Lilah (Megan Fox), a gun-wielding prostitute in love with him.

Jonah Hex was a critical and commercial flop during its theatrical release. I initially avoided the movie because the trailers looked dumb, and I thought that the movie was probably even dumber. When the opportunity to see it came around again, the first thing I thought was, I bet I’ll like this movie. And I did.

Jonah Hex is not really all that bad a movie. First, it really isn’t a Western. It is more a weird faux-Western like Will Smith’s 1999 flick, Wild Wild West. Also, a lot of this is clearly tongue-in-cheek. The director, Jimmy Hayward, tries too hard to make this film different. The film really doesn’t have much in the way of familiar Hollywood Western iconography, visual cues, or symbolism. The creators dress this movie to look like a Western, then, do everything to make it not a Western. Still, the film, at times, manages to have some good, Western-style action sequences.

The film’s writers, William Farmer and the team of (Mark) Neveldine and (Brian) Taylor, pack the story with a lot of ideas to ponder, including weird occult stuff, the character of revenge, and nature of war. There are also many scenes that are extraneous and/or badly staged, such as the motion comic-like origin story early in the film. In a comic book, this heap of weird ideas and scenes would likely not be a problem. In a film, it just makes the narrative move awkwardly.

Ultimately, the cast does right by this movie. Megan Fox makes the best of a poorly designed character. John Malkovich is, as always, superb in menacing, villainous role. Michael Fassbender is a scene-stealer as Turnbull’s homicidal right-hand man, Burke. Of course, Josh Brolin continues to prove himself as an exciting movie star and high-quality actor. It is remarkable what he does with the cheesy dialogue here. Brolin makes me wish for a sequel that may likely never come. For all its faults, Jonah Hex is so weird and is such kooky fun that it is not actually that bad.