"Splice" Merges the Monster Movie with the Family Drama 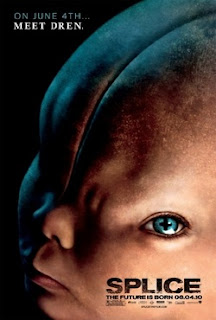 Splice is a science fiction and horror film with an international flavor – being a French, Canadian, and American co-production. It is also a kind of monster movie/family drama about two scientists and their taboo-obliterating creation.

Clive Nicoli (Adrien Brody) and Elsa Klast (Sarah Polley) are brilliant scientists who are as devoted to their careers as they are to one another. Their cutting-edge experiments in genetic engineering, which involve splicing together the DNA of different animals to create new hybrid animals, have made them superstars in their field. Now, they want to splice human DNA to animal DNA in order to create a hybrid that could potentially revolutionize science and medicine.

Although, N.E.R.D., the pharmaceutical giant that funds their research, forbids it, Clive and Elsa continue their unorthodox experiment to create a human-animal hybrid. The result is a female creature that Elsa names Dren (Delphine Cheneac). Clive starts to have misgivings about their creation and tells Elsa that they must destroy the creature. As their fantastical creation grows stronger and smarter, she also grows more dangerous.

Monster movies can be scary and thrilling or they can be creepy and disturbing. Splice is creepy and exceedingly disturbing, while managing to be more unsettling than scary. It really isn’t a cautionary tale about the misuse of science and man playing God. It is more a quirky take on the Frankenstein motif, with Clive and Elsa as two hubristic Victor Frankenstein-types, arrogantly going places that would give most scientists pause.

In a way, Splice is also a drama about a dysfunctional family. Once Clive and Elsa’s creature baby arrives, they are not as thrilled about being custodians as they were about being the first to create a human-animal hybrid. That pretty much sums up this movie’s eccentric narrative. It is smart and has a lot of ideas, but co-writer and director Vincenzo Natali and his co-writers, Antoinette Terry Bryant and Doug Taylor, are constantly shifting this movie from one genre to another. Splice starts out as a science fiction movie, before becoming a monster movie when Dren arrives. Finally, it becomes a family drama, which is why the film seems longer than it is.

The story largely focuses on Clive, Elsa, and Dren, a dynamic that grows dull and cold pretty quickly. When other characters enter the narrative, the movie comes to life. That is where the real dramatic tension and conflict are. It is not about Clive and Elsa’s little secret family, but about what happens when other people get caught up in their web of deceit and have to deal with Dren. That is most obvious in the film’s final 20 minutes.

Regardless of its faults, Splice is too intriguing to ignore. Although it uses familiar ideas, Splice also manages to be fresh and smart when many science fiction and monster movies just want to be about the action and thrills.

Posted by Leroy Douresseaux at 4:14 AM