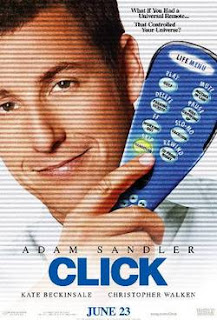 FANTASY/COMEDY with elements of drama and sci-fi

Adam Sandler is a dad now, and like some actors who began their career as rowdy or raunchy stand-up comedians, Sandler is probably going to start making movies that are more family friendly and less risqué since he’s a family man. Or probably not. Sandler’s recent Summer 2006 comedy hit, Click, features one of Sandler’s perpetually adolescent characters, but this time with a dramatic twist. This is another twist on It’s a Wonderful Life, but with more salt-of-the-earth type folks.

Michael Newman (Adam Sandler) is a workaholic architect with dreams of becoming a partner at the firm for which he works. His boss, Mr. Ammer (David Hasselhoff), keeps dangling promises of advancement, but only if Michael, his go-to guy, tackles the most difficult building design projects. These high profile assignments, however, keep Michael from spending time with his wife, Donna (Kate Beckinsale), and two children: son Ben (Joseph Castanon) and daughter Samantha (Tatum McCann). At Bed, Bath & Beyond, fate has him stumble across a mysterious figure named Morty (Christopher Walken), who offers Michael a magical universal remote that allows Michael to pause events in his life or fast-forward through them.

However, Michael begins to use the device not only to get out of daily tedium like dressing, showering, or driving through heavy traffic, but he also uses them to avoid times he doesn’t really want to be bothered with family obligations such as camping trips, dinner with his parents, Ted and Trudy Newman (Henry Winkler and Julie Kavner), or (good) sex with Donna. Things take a turn for the worse and the bizarre when the remote, through self-programming, takes on a mind of its own and starts fast-forwarding through Michael’s life. Michael always said that once he made partner and got the big paycheck, he’d stop working so much and spend more time with his wife and children, and now he may not be able to enjoy his family or his life.

Upon its theatrical release, many movie reviewers and film critics called Click crass and mean-spirited, which it is. The film is rude, crude, and vulgar, but Click is also a riotous, laugh-out-loud comedy. This film is trying to make a point, but it also wants to be funny. Sandler is true to his comic roots and to his core audience – an audience that wants him to be all-funny, all the time.

Click is also a life-altering comedy, but it doesn’t require Sandler’s Michael Newman to alter his character – just the way he lives. It’s not that Michael has forgotten how important his family is (and he apparently has little or no friends), but he’s ignoring them because he’s obsessed with being rich. He thinks that once he’s wealthy and can give his family all the niceties, life will be grand, but his wife and children are happy with life as they currently have it, only wanting more of him. Normally, a movie following this message would be syrupy and dull, but Click doesn’t short us on the belly laughs.

There are good performances all around, though none are great, and Sandler looks kinda punchy and tired. The greatness in this movie is the writing, and unlike Old School, Click’s writers don’t play at being subversive and rude, only to chicken out in the end to defend some bland, pop culture version of middle class values. It defends real middle class people – good guys who don’t have to be squeaky clean. That’s why Click is a heart-warming comedy/drama about love of family, but it’s still rowdy deep in its comic soul.