Review: Third Time is Not a Charm for Washington/Scott in "Deja Vu" 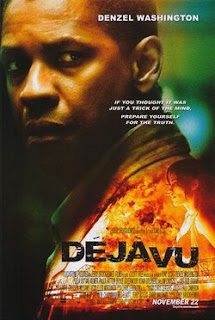 SCI-FI/THRILLER/MYSTERY with elements of action

Doug Carlin (Denzel Washington), ATF agent, is investigating a cataclysmic explosion of a New Orleans ferry that is possibly a terrorist attack. Carlin also happens upon the homicide of a young woman named Claire Kuchever (Paula Patton) that may be tied to the ferry bombing, and that’s when Carlin begins to believe that he has some kind of emotional connection to Claire. It’s déjà vu – that unsettling feeling that he knows someone he’s never met and recognizes a place he’s sure he’s never been.

Then, Carlin meets FBI Agent Andrew Pryzwarra (Val Kilmer) and a small team of physicists who have apparently opened a window through which they can view the past. That’s when Carlin falls down the rabbit hole (or through a wormhole, so to speak) that will point him to the identity of the bomber and bring he and Claire closer. But by tampering with the past, will Doug Carlin save Claire’s life or will he cost them both their lives?

Déjà Vu is the third collaboration between Oscar-winning actor Denzel Washington and director Tony Scott (after Crimson Tide and Man on Fire), and because they have such a good rapport, this preposterous sci-fi, mystery thriller manages to be a tasty popcorn flick in spite of the holes in the plot. The film is by-the-book Scott and Washington. Déjà Vu looks like Scott’s usual work, complete with burnished photography and lots of fancy editing and camera cutting. Washington does his usual determined, confident, cocky-but-sensitive law enforcement/military type. This movie isn’t Oscar bait; it’s a Denzel Washington action/thriller vehicle helmed by a director and producer (Jerry Bruckheimer) who both know how to do action/thriller vehicles for A-list movie stars.

As for the science fiction (time travel) behind Déjà Vu: it’s the kind material we get from movies on the Sci-Fi Channel. The difference is Déjà Vu has a bigger budget and big Hollywood names behind it instead of the usual Sci-Fi Channel suspects: some minor character actors and a team of filmmakers that generally works on the periphery of the movie industry. Déjà Vu gives lots of thrills and edge-of-your-seat suspense, but it all seems so predictable and ill conceived that it might well be a made-for-TV sci-fi movie that got lucky and received a theatrical run. In the end, this movie may be remembered for its absurd and outlandish sci-fi concept and not much else. Otherwise, Déjà Vu is a Denzel Washington movie that even Washington fans can wait for on DVD.