"The Incredibles" the Best 3D Animated Superheroes... So Far 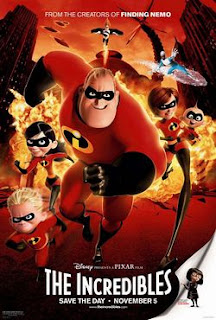 Mr. Incredible (Craig T. Nelson) and Elastigirl (Holly Hunter) are two superheroes that fall in love and eventually marry. Not long after their nuptials, the government forces superheroes into retirement because the citizens that the heroes rescue start suing the government for property damages and personal injuries. Thus Mr. Incredible and Elastigirl assume their civilian or secret identities as husband and wife, Bob and Helen Parr. They go on to have three children together, the shy Violet (Sarah Vowell), the energetic scamp Dashiell or “Dash” (Spencer Fox) and baby Jack Jack.

Bob, however, sorely missed his superhero life, so at night he sneaks outs with his buddy Lucius Best (Samuel L. Jackson), formerly known as Frozone. They done ski masks to hide their identities and rescue citizens from burning buildings and such. Bob soon catches the interest of a sexy female operative named Mirage (Elizabeth Peña). She summons him to a mysterious island and offers him a job paying him three times what he makes an insurance adjuster. The job also allows him to dress up in a superhero uniform and be Mr. Incredible again. However, a mysterious and sinister villain, Syndrome (Jason Lee), with a link to Mr. Incredible’s past arrives on the scene, and his actions bring the whole Parr family from undercover. Elastigirl assumes her old identity, but the eldest Incredible children also have powers. Dash becomes…well, Dash, the boy who can move at incredible speed. Violet becomes Shrinking Violet who can become invisible and generate force field bubbles. Dash and Violet don costumes like mommy and race off to save Daddy, but will The Incredibles and Frozone be able to save the world from the menace of Syndrome.

As for the story contents of the film: the super action is as about as good as the action in X2: X-Men United and Spider-Man 2, and that is a testament to the skill of the computer techs and artists at Pixar. It is something of a miracle to get a computer to render dramatic action on that level.

However, The Incredibles lacks the heart of classic Pixar films like the Toy Story series, Monsters, Inc., and Finding Nemo. The drama, the emotional conflicts, the plot, and the poignancy are missing. The Parr family dynamics are a bit cold, about what we’d get from an average TV family sitcom. Elastigirl, although ostensibly the co-lead, feels like a supporting character; writer/director Brad Bird dropped the ball there. The daughter Violet is vague and more of a caricature than a character.

I’m sure I’m not the only one who thinks that Patrick Warburton (who played the title character in Fox’s short-lived TV series, “The Tick” and provided the voice for an animated Superman in a Jerry Seinfeld American Express commercial) should have provided the voice for Mr. Incredible, but Craig T. Nelson is really good. He gives the character extraordinary life and individuality. Nelson truly makes Mr. Incredible one of the top screen superheroes.

My favorite characters in the film were Dash and Frozone. Frozone is sadly too relegated to the sidelines, but he has enough onscreen time to make it clear that Sam Jackson should do more animated voiceover work. Dash is an absolute delight. The quintessential hyperactive kid, he is a bold, confident, and brash young hero that could be the star of his own film. Spencer Fox’s performance and the Pixar artistry make Dash a charming scene-stealer. I wouldn’t mind an all-guys line up of Dash, Mr. Incredible, and Frozone in a follow-up.

On the strength of the high quality of the computer animation art in this film, I’ll call The Incredibles the best animated film of the year. It’s a sheer delight with the suspense, thrills, and action of a good family action film. Too bad the soft drama keeps it from being a truly great film.