Prince of Persia: The Sands of Time is a Very Good Time at the Movies 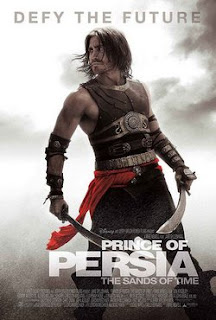 Prince of Persia: The Sands of Time is a film based upon the video game series, Prince of Persia, especially the 2003 video game, Prince of Persia: The Sands of Time. Set in a mystical and mythical version of the Persian Empire, the film focuses on a fugitive prince and a young princess trying to stop a villain from unleashing a force that can change time and even destroy the world. And this is actually a very entertaining film that is part Raiders of the Lost Ark and part Robin Hood with a bit of The Mummy (1999) thrown into the happy mix.

The hero of this story is Prince Dastan (Jake Gyllenhaal), the youngest of the three Princes of Persia. Dastan was actually adopted into the royal family when he was a boy by King Sharaman (Ronald Pickup), the ruler of Persia. Dastan, along with his foster brothers, heir-to-the-throne Tus (Richard Coyle) and Garsiv (Toby Kebbell), and their uncle, Nizam (Ben Kingsley), invade the sacred city of Alamut, because it is supposedly selling weapons to Persia’s enemies. The celebration of their successful conquest of Alamut quickly turns sour when Dastan is accused of murder.

Trying to clear his name, Dastan goes on the run with Princess Tamina (Gemma Arterton), the ruler of Alamut, and learns that the real murderer’s true goal is the Dagger of Time, which Tamina is supposed to protect. Dastan finds allies, of a sort, in a tax-averse, shady businessman named Sheik Amar (Alfred Molina) and his knife-throwing friend, an African named Seso (Steve Toussaint), and their men. The real murderer also has allies, a band of highly-skilled warriors and hired killers known as the Hassansins, and he orders them to slay Dastan.

Although I initially planned to see Prince of Persia: The Sands of Time, I decided to avoid it because all the movie trailers for it made the movie look like an empty CGI-extravaganza with little or no story and wooden characters. Well, the plot is indeed simple; the story amounts to a bunch of chase scenes, fights, and rescues; and the characters are pretty shallow. But it works. Just like The Mummy, which had a simple plot and story, Prince of Persia is a fun ride through the desert. Prince of Persia’s characters aren’t as endearing as the feature players are in The Mummy. Still, I’d follow Dastan, the chatterbox Tamina, Sheik Amar and Seso again, if they went on another breathtaking mission to stop a bad guy and save life as we know it (especially if their adventures featured another lush score by Harry Gregson-Williams).

This movie is also easy on the eyes with its beautiful desert cities, extravagant backdrops, and lavish sets. The cast seems to be made of every known skin color and body type, and the costumes are dazzling and eclectic. No performance really stands out, but somehow, Prince of Persia: The Sands of Times works and works really well. It’s just fun to watch. It’s the kind of movie some of us will watch again and again on television.

Posted by Leroy Douresseaux at 11:41 AM