"Predators" Rocks Except When It Sucks 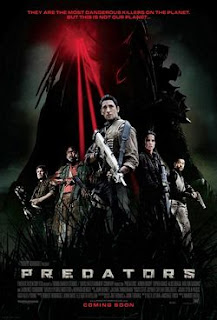 SCI-FI/ACTION with elements of horror

In the 1987 movie, Predator, Arnold Schwarzenegger’s Dutch led a Special Forces team into the Guatemalan jungle. There, they encountered an alien hunter (called “the Predator”) that picked them off one by one. The 2010 movie, Predators, is a direct sequel to the original film, and follows a ruthless mercenary, as he leads a group of trained and untrained killers through a jungle on another planet.

In Predators, Royce (Adrien Brody), an ex-American military turned mercenary, awakens to find himself falling from the sky into a vast, unknown jungle. He soon meets seven other people that arrived there in the same manner. They include Isabelle (Alice Braga), a sniper and black operations soldier; Edwin (Topher Grace), a doctor; Hanzo (Louis Ozawa Changchien), a Yakuza, and Stans (Walton Goggins), a death row inmate; among others. They are killers without a conscience.

The group soon learns that they are not on Earth. After a pack of alien beasts attacks them, Royce deduces that the planet is a game preserve and that they are the game and the prey. When the hunters stalking them finally attack, the humans discover just how formidable they are. Their only hope – to get off the planet – is seemingly an impossible one, but they may get help from the unlikeliest sources.

I found Predators to be immensely entertaining, and this is also one time that I can certainly give credit to the director the film, in this case, Nimród Antal. He works action movie magic out of a script filled with inane characters and inconsistencies. Some of the characters are extraneous and pointless (a Yakuza!) or defy common sense (a death row inmate!). Some of the good ones disappear too early in the film, Danny Trejo’s Cuchillo, a drug cartel enforcer, and Mahershalahashbaz Ali’s Mombasa, a death squad soldier. The audience doesn’t get to know the characters that well, if at all, and they often come across as cardboard cutouts. However, Laurence Fishburne’s Noland is a delight; Fishburne plays him as so deranged that the character is both scary and alluring.

Meanwhile, the director took advantage of a new setting for the Predator franchise (an alien world) and special effects, CGI, and production design talent, improved from the original, to make a movie that looks cool, especially when the Predators attack. The moment the viewer stops and tries to make sense of the plot, story, and concept, Predators begins to fall apart. When the viewer focuses on the chasing and the killing, Predators is just plain fun – so much fun that I didn’t want it to end. So let’s go with this formula for a future film: more Predator action and fewer crappy characters.