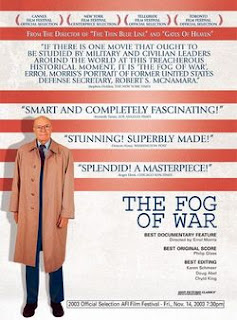 Oscar® finally noticed famed documentary filmmaker Errol Morris, and the first time turned out to be the charm. Morris’ The Fog of War: Eleven Lessons from the Life of Robert S. McNamara won the Academy Award for “Best Documentary, Features.”

Morris built his 95-minute film out of over 20 hours of interviews he conducted with Robert McNamara (1916-), the Secretary of Defense for both the John F. Kennedy and Lyndon B. Johnson presidential administrations. Morris also supplemented the film with archival footage and other interviews, as well as with charts, graphs, animation, and other film footage. Although the film covers most of McNamara’s life, Morris’ focus is on McNamara’s involvement with the Vietnam War.

Although the film doesn’t seem to make any moral judgments on its own, Morris leaves that up to McNamara, who, in the end, doesn’t seem like he’s in the mood to make apologies for what happened in Vietnam. Watch the film and listen to the man and really understand that war, like fog, can be ethereal, so people can have a difficult time seeing the wholeness of a thing, unable to see all the possibilities and angles. McNamara is also difficult to see. For all that he tells, he really doesn’t answer many questions; he doesn’t answer the questions he’s expected to answer. Why did the war happen? Why didn’t the U.S. end it sooner?

Still, McNamara lived a large life and worked for and with a lot of very influential and powerful people. Obviously, he’s a bright fellow, and he shares a lot of knowledge and information with us. He may not answer some of the big questions that we have, but he brings us inside the machinery of war and lets us see a lot. The Fog of War is a revealing portrait, and those who listen will learn a lot about the man and a lot about 20th century American military history. It’s amazing how much McNamara and Morris can pack into such a short film. The Fog of War is a vivid film more potent than fiction and as rich as life itself.

Posted by Leroy Douresseaux at 12:16 PM