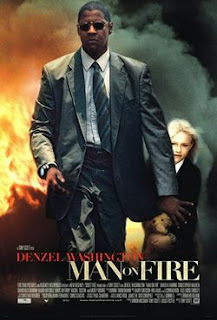 DRAMA/CRIME/THRILLER with elements of action

The new Tony Scott-directed Denzel Washington-starrer, Man on Fire, is not two movies disguised as one film, nor is it simply a revenge film, as many have said early in the film’s release. It’s as much a drama about a man fighting for something and someone he loves as it is a pay-back-the-bastards flick.

Washington is John Creasy, a burnt out alcoholic counter insurgency, military type who takes a job protecting Pita (Dakota Fanning), the young daughter of a wealthy man in Mexico City. The city has seen a wave of kidnappings of rich people, where upon the kidnappers extort millions of dollars from the victims’ families. But Creasy and Pita are ambushed; the kidnappers shoot Creasy and escape with the child. After the money drop off is botched, the kidnappers claim to have killed the girl in retaliation. Still recovering from his wounds, Creasy goes on a mission to find everyone involved in the kidnapping, from top to bottom, and kill them all.

In the early part of the film, we meet Creasy, but learn very little about him. Director Tony Scott quickly shows us just enough of the growing relationship between Creasy and Pita in hopes of getting us to believe that the soldier of fortune becomes attached to the precocious child he’s supposed to protect. If their bonding, we’ll also buy that Creasy is going to become an angel of death to all those involved in harming Pita. Scott, who has a history of directing flashy action pictures like Top Gun, True Romance, and Crimson Tide, actually succeeds in weaving a fairly touching short story of a killer bonding with innocence. It’s the rest of the cast that gets in the way.

From the parents to the cops, it’s a parade of characters who are just barnacles on the interplay between the veteran Washington and the newcomer Fanning’s character interplay. Sometimes, it also seems as if the story either can’t live up to its premise or to the fact that the leads can pull off the story.

The second half of the film, the alleged revenge movie, is not so much on fire as it is on simmer. It’s a cool burn with some very effective scenes, and Man on Fire is at this point probably one of the quietest intense thrillers in a decade. As fancy as the camera work and film editing is, Washington makes the “man on a mission” part of the film work. The photographic tricks and effects are just the icing on Denzel’s cake. He plays his character as quiet and patient, but also relentless and ruthless. He’s surprises and shocks. It’s fun to watch an actor work a post-MTV revenge flick like a cool 70’s Eastwood payback movie. If you can’t get into what he’s doing in this film, you’re jaded.