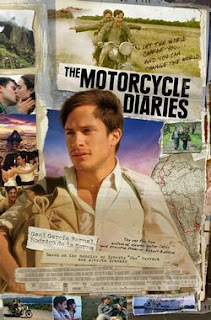 Before he was Che Guevara, the legendary Cuban revolutionary who also fought in the Congo and Bolivia, 23-year old Ernesto Guevara de la Serna (Gael García Bernal) and his older friend Alberto Granado (Rodrigo De la Serna) traveled across South America on Alberto’s beat up late 30’s model motorcycle, “The Mighty One.” The duo’s adventures are sometimes comic (wooing women and numerous episodes of falling off their bike or pushing it for miles), suspenseful (fighting Ernesto’s asthma), or serious (volunteering to work at a leper colony). As the film progresses, we see the journey, which lasted over a year from 1951-52, have a profound effect on Ernesto as he saw the people of South America as one people rather than as a collection of provincial states. The journey would lead him to become the revolutionary, “Che” Guevara, who would have a huge impact on many nations.

Diarios de motocicleta (The Motorcycle Diaries) is a subtle travelogue that shows us how our surroundings can shape who we are, as we see Ernesto Guevara’s long journey change him, or at least make him no longer be the person he was when he left home. Gael García Bernal and Rodrigo De la Serna give delicate performances that resonate over this stirring, yet quiet film. The actors seem to have a real friendship that carries over to the characters and vice versa. Rodrigo’s Alberto is the jolly free-spirited, womanizing clown who keeps Che from going to deep into himself and disappearing from us. Bernal gives us an Ernesto/Che who shows his intellectual and spiritual awakening in his smooth gaze and facial expressions.

Director Walter Salles and cinematographer Eric Gautier create a layered film by allowing the wonderful and diverse settings and exotic locales to permeate the film story. The Motorcycle Diaries literally reeks of being a foreign movie. Of course, there is the language, but unlike many American films, there is no sense of forcing genre conventions on this tale of how the land transforms the soul of a man. Sometimes, Diaries is too low key, but its power comes from its visuals. Every frame and each scene is like a magical symbol simultaneously telling a story and taking us on a journey that might mean spiritual transformation. It’s a film for those who are interested in seeing a movie that reveals the heart and spirit of the land and its people.