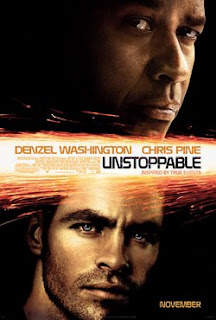 Unstoppable, a new action thriller, is the fifth collaboration between Oscar-winning actor, Denzel Washington, and director Tony Scott, known for his stylish action movies and thrillers. The two have made some entertaining films (Crimson Tide, Man on Fire), but Unstoppable is truly a fine piece of work. It is a nail-biter, an edge-of-your seat thriller, and a heart-stopping movie that has many in the audience clapping, cheering, and laughing. Unstoppable is the great summer movie that somehow missed the summer.

The film focuses on Frank Barnes (Denzel Washington), a veteran locomotive engineer, and Will Colson (Chris Pine), a rookie train conductor. As the old guy being put out to pasture and the new guy who got in because of family connections, respectively, the two naturally find tension and conflict between them. That is put aside when a half-mile freight train ends up on the loose with no humans onboard to control it. The runaway train is headed for the Stanton Curve in Stanton, Pennsylvania, at 70 miles per hour, and it is carrying combustible liquids and toxic chemicals. Any train hitting the Stanton Curve at more than 15 miles per hour will derail to disaster. When all attempts fail to stop the locomotive, Barnes and Colson are the only people who can stop the train, but can they get to it in time?

Director Tony Scott and screenwriter Mark Bomback (Live Free or Die Hard) have transformed the locomotive into something as exciting and as mesmerizing as any Hollywood movie star. Scott not only makes the threat of annihilation by train seem real, but also the working class small towns threatened by the train and the gritty train yards where the mechanical beast originated.

This movie probably won’t win any Oscars, although composer Harry Gregson-Williams’ pounding, textured score (which at one pointed mimicked the sound of a panicked heartbeat) should get some consideration. With this film, Scott puts forth a directorial effort that doesn’t take second place to any of this year’s most popular action-oriented films like Alice in Wonderland and Inception. Bomback has fashioned a story that we need now – the tale of two men way over their heads and out of their league who put their lives on the line for people they don’t even know. Without a load of fancy CGI, Scott has reminded us that real world threats are every bit as scary as aliens and evil wizards.

Tony Scott has crafted a superb film. It’s one of those good movies we’re always demanding. Unstoppable, don’t stop yourself from seeing it.