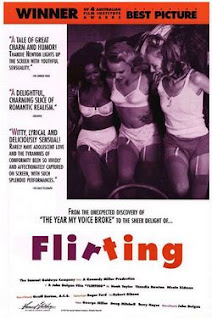 Danny Embling (Noah Taylor) is a free-spirited young man attending St. Alban’s, an all-boys prep school in rural Australia, circa 1965. Called “Bird” by his classmates, Danny is an outcast. He meets Thandiwe Adjewa (Thandie Newton), a sophisticated girl from Uganda, the daughter of Ugandan dissidents living in Australia. Thandiwe is a student at Cirencester Ladies College, an all-girls prep school across the lake from St. Albans. Danny and Thandiwe began an interracial romance that blossoms despite some prejudice they face from fellow students. Nicole Kidman plays Nicola Radcliffe, at first a rival, then eventual confidant of Thandiwe.

Flirting, a follow up (or sequel) to the 1987 John Duigan film, The Year My Voice Broke, is one of the best and least contrived depictions of first love ever put to film. Taylor and Newton bring verisimilitude to this tale of surprising and unexpected love. One can just feel the spark between them and how their love grows, so that as the relationship progresses, their actions seem so natural.

The film also has a numerous supporting performances; many are small, but add just the right touch for the film’s setting and narrative. Bartholomew Rose as Danny’s friend, Gilbert “Gilby” Fryer, is full of advice for Danny and perhaps a little envious of him (or has a “boy crush” on him as boys sometimes do have on particular male friends). Nicole Kidman also adds a nice touch in a small but motherly role as the “it” girl at Cirencester. John Duigan’s gentle film has touches of John Hughes’ teen romances (Pretty in Pink) with the dramatic narrative detail of a John Sayles (Passion Fish, Lone Star) film.

Posted by Leroy Douresseaux at 1:56 PM