Happy B'Day, Toni Collette: Connie and Carla (Well, at least I liked it...) 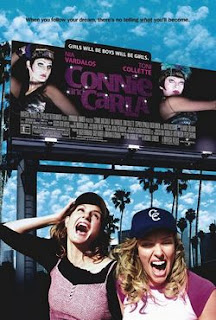 Connie and Carla was a box office dud, but I wanted to see the movie the first time I saw a commercial for it. Having finally seen the comedy/faux musical, I enjoyed it as much as I thought I would. It’s a good old fashion fish-out-of-water and mistaken identity comedy, and it has two exceptional leads in Nia Vardalos and Toni Collette.

In the film, Connie (Nia Vardalos) and Carla (Toni Collette) are two struggling Chicago dinner theatre performers, making a living where they can, in this case, at an airport bar. They witness their boss’ murder at the hands of Rudy (Robert John Burke), a Russian mobster. Unfortunately, when their boss knew he was in trouble, he slipped a kilo of cocaine that belonged to Rudy in Carla’s bag. Now, Rudy wants his coke and the girls dead, so Connie and Carla head out to the place no one would think of looking for them because it has no dinner theatre, Los Angeles.

After unsuccessfully hunting for work, they pretend to be drag queens and begin a drag musical act that is so popular, it lifts the status of the club where they perform. The local drag queens and the straight community embrace them, and they turn their new boss, Stanley’s (Ian Gomez), bar into a very hot dinner theatre club. Connie also falls for Jeff (David Duchovny), the straight brother of one of the drag queens, but Jeff thinks Connie is a man, much to her chagrin. However, they left Connie’s dumb boyfriend, Al (Nick Sandow), and Carla’s equal dumb squeeze, Mikey (Dash Mihok), behind in Chicago. Before long Al and Mikey and Rudy and his musical theatre-loving henchman, Tibor (Boris McGiver) come looking for the girls. Can they save their own lives and keep the fact that they’re women pretending to be men pretending to be women secret?

Nia Vardalos’s script combines the best elements of films like Sister Act, Some Like it Hot, and Victor/Victoria, and director Michael Lembeck puts together a comedy that mixes slap stick and poignant political correctness into entertainment. It’s the most feel-good drag queen movie from a major Hollywood studio that I’ve seen, mainly because it treats it subject matter in a glossy way. The film assumes that if you’re a good guy, you accept drag queens even if you’re not 100% OK with their culture and lifestyle.

Sociology aside, the lead actresses make this film. Ms. Vardalos is just plain funny; she has a face and personality made for broad, goofy, dumb, obvious comedies. If it’s a farce or a tale about different cultures and groups thrown together, she can milk it for lots of yucks. Ms. Vardalos is also blessed with an excellent co-star in Toni Collette. Although many remember her as the put upon mother in The Sixth Sense, Ms. Collette is a fine actress who is an exceptionally good comedic character actress; she’s a pleasure to watch.

If one isn’t uptight about drag queens or gays, if one is secure with one’s sexual orientation, and if one isn’t a religious bigot, Connie and Carla is light-hearted fun. It’s not the smartest movie, but between the music, show tunes, dance routines, and broad drag queen humor, it’s darn funny.

Posted by Leroy Douresseaux at 12:55 PM