"Up" as Good as it Gets (and Belated Happy B'Day, Ed Asner) 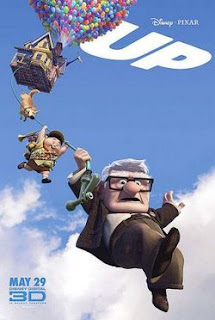 Pixar Animation Studios’ 10th computer-animated feature-length film is entitled Up. This visually and emotionally beautiful film is also the 10th example of how a group of animators and filmmakers can use their tools and workstations to create fully rounded stories with depth of character and storytelling. And Pixar does it better and more consistently than live action film studios. Up tells the story of a sour old man, a lonely boy, and an old house that sails through the air powered by thousands of balloons tied to the structure.

The story centers on a grouchy widower, Carl Fredricksen (voiced by Ed Asner), a squat old fellow with a box-shaped head and square glasses parked on his bulb of a nose. A retired balloon salesman in his 70s, Carl mourns the loss of his wife, Ellie. Once upon a time, the couple dreamed of traveling to the mysterious South American locale of Paradise Falls. At age 78, life seems to have passed Carl; that is until it delivers two twists of fate.

First, a misunderstood confrontation threatens Carl’s home and freedom. He decides that he will take his home to Paradise Falls by floating the house there with the help of thousands of colorful balloons tied to it. Life’s second surprise comes in the form of a persistent, 8-year-old Junior Wilderness Explorer named Russell (Jordan Nagai). Russell becomes an accidental stowaway on the floating house – one that is not welcomed as far as Carl is concerned. However, the lad – himself round, buoyant, and bouncy as a balloon – proves to be an invaluable, loyal, and trustworthy pal, especially once the house finally lands.

Shortly after landing, Carl and Russell encounter a large flightless, ostrich-like bird, which Russell names Kevin. Kevin is being hunted by a vicious pack of dogs, led by a Doberman named Alpha (Bob Peterson). However, one of the dogs, Dug (Bob Peterson), the nerd of the pack, befriends Carl and Russell. Dug, like the other dogs, can speak because of a translating collar on his neck. But things really get hairy when Carl meets his boyhood idol, famed explorer Charles Muntz (Christopher Plummer), who is obsessed with the mystery bird, Kevin.

Pixar’s films are always grounded in real emotion – whether it is a desperate father searching for his lost son (Finding Nemo), a marooned star determined to win again (Cars), or, as in this film, a grieving husband lost without his wife. Of all those films, Up seems to be the one best established on substantive ideas and themes. That might sound strange when considering (1) that Up is about a house that travels across continents by balloon power and (2) that for most of the movie, an old man with a lame hip and an eight-year-old kid drag the still floating house across rough terrain as if it were no more than a large and troublesome kite.

Yes, as is usual for a movie from Pixar (the gold standard in 3D/computer animation), the animation is superb. The sense of space (to say nothing of the composition, movement, and storytelling) in this 3D animation is superb. I’m starting to believe that 3D is the high-tech replacement for stop-motion animation. High-quality computer-animation gives the viewer the sense of watching something taking place on a stage, which is similar to the visual illusion stop-motion creates.

Yes, as is usual for a Pixar movie, the characters are also great. Only Pixar could make a animated feature that has as it star a widower who is almost 80-years-old, walks with a limp, and looks like a cross between Spencer Tracy and Walter Matthau, a great lead. But one superb character isn’t enough for a Pixar film. Up also gives Russell, a misfit boy who is braver than he’d believe himself to be; Charles Muntz, a man made dangerous and pathetic by his obsessions; and Dug, an adorable canine who personifies all that is good in a loyal dog. Even the weird bird Kevin manages to be something we’ve never seen before.

As I stated earlier, however, Up is about substance and not just flights of fantasy. In Carl and his former idol Charles, Up posits that obsession can drain away the will to truly live, and before the obsessed knows it, he is old and alone. The creators of Up dare to deal with the issue of loved ones dying and loved ones leaving us, and the film implores its viewers to have an adventure with the ones we have – the people who are with us and the people who want to be with us. The impressive thing is that this movie is hugely entertaining, but the escapism can’t cloud Up’s strong and clear messages.