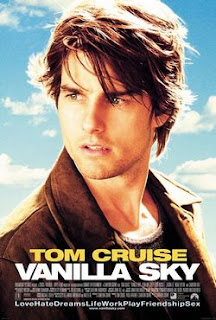 David Aames (Tom Cruise) is the wealthy scion of a publishing empire who lives only for himself and his pleasures. He treats his novelist friend Brian Shelby (Jason Lee, Chasing Amy) as a possession to be admitted or dismissed as needed, though Aames often professes deep love for Shelby. He has recreational sex with another friend, Julie Gianni (Cameron Diaz), a girl who practically admits to being around the block quite a few times. At a party that he hosts, David sees a stunning beauty that Brian has brought to the party with him. The looker, Sofia Serrano (Penelope Cruz, who was in the Spanish film upon which Vanilla Sky is based), throws David for a loop and he falls very hard for her.

Aww, but Julie is jealous; she follows David and is waiting for him after he spends the night (a sex free night) with Sofia. In an insane rage, Julie, with David a passenger, runs her car off the road, killing herself. David survives, but his body is damaged and his face is badly scarred. From that point, David’s life is a series of time shifts; past, present, and future loose their meanings.

Directed by Cameron Crowe, who also directed Tom Cruise in Jerry Maguire, Vanilla Sky is a mind numbing and genre bending film that mixes elements of romance, romantic thriller, mystery, suspense, and science fiction. It demands the viewers’ complete attention, while it careens across the screen like the out of control car that changes David Aames life.

Vanilla Sky is also a movie that can test an audience’s patience. It has ideas and messages, and most people do not want their movies to preach to them, at least not preach smart ideas. They want a loud, vivid, cinematic experience – special effects and movie magic. “Entertain me” is the mantra, and Crowe adds only the thinnest of candy coatings to his film.

The movie begins with a beautiful scene in which David discovers that he is alone in Times Square; he runs down the street for a few minutes totally afraid of being alone before we learn that this is a dream. There are also voiceovers while we follow David’s privileged life. There is the accident, and then we find David in a dark room wearing a mask, while a psychologist (Kurt Russell) prods him for answers regarding a murder of which David has been accused. From then, we’re bouncing back and forth through time, through illusions, dreams, fantasies, flashbacks. It can be disconcerting, but the film is so alluring that you want to soldier on.

Cruise has always been a good actor in the hands of good director, and Crowe is good. Over his career, Cruise has learned to open himself up to the possibilities of using his handsome face to express a variety of feelings and emotions, where once he simply lit up that million dollar smile and that was that. He is good here and quite believable. It’s no trick to play a spoiled, wealthy brat, but he convincingly transforms himself into the tortured package of damaged goods.

The supporting cast in nice, but while Penelope Cruz got all the attention, Diaz is the surprise. Some may believe her looks carry her career, but she can act. She plays the wild, vulnerable, hurt, and angry Julie Gianni to the hilt while also playing it down low and subtle. She creates a three-dimensional villain of sly evil and of terrible sadness.

Vanilla Sky is rife with musical references, most of which are quite annoying, but the Jeff Blakely reference is dead on appropriate for its scene. There are lots of visual references from pop culture to fine art, and they mean something, but you have to catch them, as they fly by so quickly.

Vanilla Sky is a good film, especially because it asks for the viewer to get involved where most movies only want to yell at you. At its heart are good messages about responsibility for the choices one makes, selfishness, love, and sacrifice. It stumbles and rushes to it fantastical, sci-fi ending that almost destroys film, but the movie is a worthy effort by ambitious talents. By no means perfect, it is still a grand entertainment and a wonderful puzzle with which to struggle, and it doesn’t mind trying to be smart even when it over reaches its ambitions.

Posted by Leroy Douresseaux at 8:28 AM