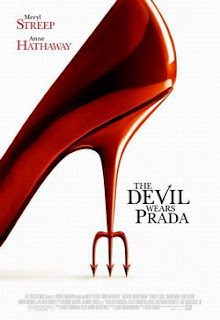 Fresh out of college with her journalism degree, Andy Sachs (Anne Hathaway) has decided to go to New York City to pursue her dream of serious writing, although her parents would have preferred Stanford Law School. Her impressive college resume lands her job at Runway Magazine, the fashion bible of NYC. Andy’s job is to be the assistant to Emily (Emily Blunt), who is in turn the assistant to the fearsome Miranda Priestly (Meryl Streep), Runway’s editor-in-chief and the most powerful woman in fashion. This is a job, as Nigel (Stanley Tucci), one of Miranda’s employees, tells Andy, a job that a thousand other girls would kill for. However, Andy isn’t much on fashion, and her wardrobe is more off-the-rack drab than haute couture. She’s really wrong for the job, and Miranda is a prickly, domineering, ice queen who quickly dismissed the two assistants prior to Andy. Still, Andy begins to like her new job, and that’s when it conflicts with her circle of friends, especially her boyfriend, Nate (Adrian Grenier). Now, Andy has to balance a burgeoning profession career with her personal life, even while’s she finds herself drawn closer to the dragon fire that is Miranda Priestly.

The Devil Wears Prada relies on two basic and familiar storylines – the fish out of water story and the career girl’s adventures, and the movie does both well because of its star. Meryl Streep’s name may be first on the marquee, and she gives a tour-de-force performance (as is her want), but this is Anne Hathaway’s movie. The girlish looks and charms she showed in Disney’s The Princess Diaries franchise and the dramatic chops she showed in Brokeback Mountain both come to play in The Devil Wears Prada, the former more than the latter. Her Andy Sachs is both spunky and serious, and Anne shows so much of that in her highly emotive facial expressions – done with exquisite subtly.

Of course, much of this film’s attention is on Streep’s flashy and brassy turn as Miranda Priestly, but ever the consummate professional and actor-as-artist, Streep’s theatrics are completely in the context of the film. She doesn’t stop the film cold when she turns on Miranda’s cold. Streep’s performance allows for this movie to have something that successful films need – great scenes. Great movies have several great scenes, and while The Devil Wears Prada isn’t great, it is easily the top comedy of 2006. Streep anchors the great scenes (or even builds them) that make this movie a must-see for movie lovers.

The Devil Wears Prada is one of those flicks that deserves and has earned such film critics’ clichés as “devilishly clever,” deliciously wicked,” “fiendishly clever,” etc., and even “scrumptious.” That’s because the script allows us to tag along on a crafty romp through the fashion world the movie has fashioned. As snarky as the comedy about the fashion industry in this movie may be, the ultimate treat is two outstanding performances by Streep and Hathaway. Their chess match, or test of wills, as it may be, is the pillar of this ingeniously constructed comedy.