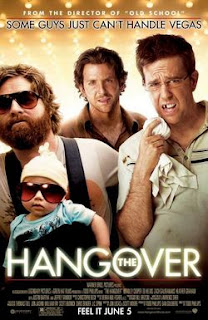 It may be a cliché in movies and television series to send characters to Las Vegas for a bit of hedonism. Now, it is also a city where families can have fun and where businessmen can get down to business. Still, Las Vegas has long been the go-to place for many pleasure-seeking men.

The new film, The Hangover, from director Todd Phillips (Old School), takes a quartet of middleclass guys to Vegas for a bachelor party. While their plan for an evening of nightmarish debauchery eventually becomes a waking nightmare, their distress and torment are comedy gold for movie audiences.

Two days before his wedding to his bride-to-be, Tracy Garner (Sasha Barrese), Doug Billings (Justin Bartha) and three pals leave Los Angeles and drive to Las Vegas for a blow-out bachelor party that will be so crazy (they hope) they’ll never forget it. Doug’s friends are Phil Wenneck (Bradley Cooper), a good-looking, junior high school teacher, who puts on that married life is killing him. Dentist Stu Price (Ed Helms) is an uptight dweeb, who is made all the more anxious by his controlling girlfriend, Melissa (Rachel Harris). Melissa treats Stu like a slave, and he has to lie to her about the Vegas trip. Finally, there’s Tracy’s deranged brother, Alan Garner (Zach Galifianakis); pudgy, bearded, and dumber than a bag of hammers, Alan may be as dangerous as he is clueless.

After offering a toast to their diabolical plans on the roof of their Caesar’s Palace, the guys head out for an evening of ritualized Vegas fun (gambling, drinking, whoring, etc.). But the next morning, Phil, Stu, and Alan wake up and discover they can’t remember the events of the previous evening. For unknown reasons, they now share their Caesar’s Palace suite with a tiger (in the bathroom) and a six-month-old baby (in the closet). And they can’t find Doug. With no memories of what transpired and only a day before the wedding, the three hung-over men must retrace their hazy steps, follow a handful of clues, and sift through all their bad decisions in order to find Doug and get him back to L.A. in time for his wedding.

In The Hangover, the surprises are everything, and those surprises are the strange people with which our heroes interacted, the shocking places they’ve been, and the outrageous things they’ve done. Some of those specific surprises involve Mike Tyson, a Vegas wedding chapel, and flamboyantly gay Asian gangster (Ken Jeong), and delightful performances given by Heather Graham and Mike Epps in small roles. That’s to say nothing about the riot that is the end-credit montage.

A lot of the fun in this movie is recognizing that the boys, especially Phil, Stu, and Alan, are types as much as they are characters, and that while each often acts as we would expect him to, it’s when they do something out of character that The Hangover hits a high point. Still, it would have been good to have richer character interplay, but there’s isn’t much time for soul searching when all a scene requires is that the character put his face in a hooker’s lap. It’s satisfying that Cooper, Helms, and Galifianakis are so good at making these character types at least seem like great characters.

The fun in this movie is getting the surprises, and The Hangover is all about shocking the viewer. Considering that one expects shocking things to happen when four ordinary guys go to Vegas for a bachelor party, the genius of The Hangover is that it finds a way to make the predictable always unpredictable.

Posted by Leroy Douresseaux at 6:36 AM