Harry Potter and the Deathly Hallows: Part 1 is the One 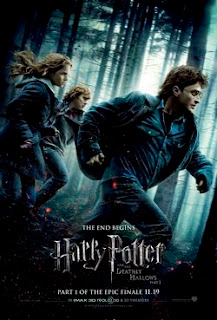 Harry Potter (Daniel Radcliffe) and his closest friends, Ron Weasley (Rupert Grint) and Hermione Granger (Emma Watson) embark on a quest to find and destroy the Horcruxes, the secrets to Lord Voldemort’s (Ralph Fiennes) immortality. Meanwhile, Voldemort launches his latest plot to kill Harry, so the Order of the Phoenix hatches a daring mission to protect Harry. Not to be denied, Voldemort’s allies, the Death Eaters, launch a surprise attack, which scatter Harry and his allies. Harry, Ron, and Hermione continue their quest in London, where the search for a Horcux takes them into the heart of the Ministry of Magic and begins a journey that will find the friends alone with only themselves upon which to rely.

Apparently dividing Harry Potter and the Deathly Hallows into two movies will allow the filmmakers to make what is essentially one larger movie that is closer to its Potter book than the previous Harry Potter movies were to their respective books. One thing this split will do is allow the narrative to breathe. Some of the Potter movies always felt like they were missing something.

Sometimes, when filmmakers turn books into movies, they make the action in the book more frantic, in a way to make the narrative pop and seem livelier to movie audiences. They also leave out entire subplots and characters in adapting books to the screen. Movies, especially those created for wide public consumption, are often shallow compared to novels. Novels don’t have to offer fizzy amusement every page and sometimes show the less fun side of a character. Novels can have entire sequences that might seem boring compared to the non-stop nature of film, especially cinema of sensations, event movies, and summer tent pole flicks.

Harry Potter and the Deathly Hallows: Part 1 is not afraid to show the drier side of the Potter stories, and for the first time, a Harry Potter film really delves into the bittersweet of Harry Potter’s life and the complex dynamics involved in being a Potter friend, ally, or associate. Part 1 is certainly filled with exciting action scenes, breathtaking aerial duels, explosive fight scenes, sparkling displays of magic, and hot death, but it is also contemplative and emotional. This movie has both a meditative inner life and a combative outer life, which makes for a richer movie and a more fulfilling narrative.

Harry Potter and the Deathly Hallows: Part 1 is everything thrilling/action/fantasy that the previous Harry Potter movies were, but also something more. It has the character and drama befitting a great work of fantasy, and yes, you might even call it a Harry Potter movie that is really for adults.

Posted by Leroy Douresseaux at 8:14 PM