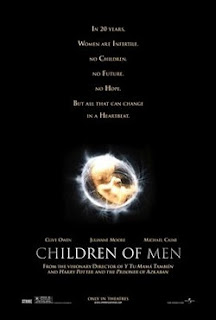 It’s London, 2027, and Theo (Clive Owen) is just trying to get by, working as a bureaucrat who lives in a state of numbness. The world has changed so much since he was an idealistic young activist. Hope for the future is dying because it has been almost 19 years since the last baby was born. Most nations have fallen apart as people embrace separatism and descend into nihilism and lawlessness. To survive the ever-increasing internal strife, terror attacks, and tremendous influx of desperate refugees, Great Britain embraces militaristic imperialism. The government has been moving the refugees – called “fugees” – into detainment camps for deportation.

Meanwhile, Theo is content to visit his old friend, Jasper (Michael Caine, looking surprisingly fresh in a shock of long white hair) at his secluded home in the remote countryside away from London, but suddenly, Theo’s ex-wife, Julian (Julianne Moore), is back in his life. The leader of the Fishes, a covert group fighting for immigration rights, she needs Theo to obtain transit papers for a young woman named Kee (Clare-Hope Ashitey), whom Julian wants to move out of the country. Theo suddenly finds himself deep into Julian’s covert operations when disaster befalls them all, and Theo learns that Kee is eight-months pregnant. Suddenly, Theo and Kee are in a desperate race, avoiding friend and foe, in an attempt to get Kee to safety and maybe save the future of mankind.

Children of Men may very well be the best speculative science fiction film to come around in ages. With its relentlessly bleak view of the future, it is one of the scariest dystopian films to come along in while. Since this future is certainly plausible, Children of Men is one of the few sci-fi films of the last few decades with that favor the grit of realism rather than the flashy gleam of such science fiction stalwarts as aliens and time travel.

Director Alfonso Cuarón (Y tu mamá tambíen and Harry Potter and the Prisoner of Azkaban) and his creative staff, in particular cinematographer Emmanuel Lubezki and production designers, Geoffrey Kirkland and Jim Clay, focus on keeping Children of Men from being so way out there in the future (Blade Runner) or almost supernatural (The Matrix) that the audience is not only riveted, but can’t ignore a story that one could mark on a calendar as likely to occur soon. Cuarón goes full steam ahead mixing art, politics, and entertainment. Almost from the early moments of the film, it is hard to separate the film. I found myself entertained at the highest level, while being impressed with Children of Men as high art, but at the same time, I couldn’t ignore the politics. Cuarón makes England look like the ruined version of present-day Iraq that I see every day on the news. It’s so much to take in, and Cuarón has the film hit the ground running with the kind of wild ride that popcorn action movies provide. Children of Men, however, is a gourmet film meal with the kick of a Memphis (or Texas) barbeque event action movie.

There are good performances all around. Although Julianne Moore and Michael Caine share top billing with Clive Owen, the star couple is Owen and newcomer Clare-Hope Ashitey. They have the kind of screen chemistry that directors would almost sell their souls for in order to have it for the leads in their films. Owen and Ashitey with unyielding subtlety, quiet determination, and simmering intensity give Children of Men its spiritual hook. Together, they make sure that this political sci-fi, New Testament allegory closes as it should, and Alfonso Cuarón has chosen a grim and dour scenario and executed it with breathtaking technique. Children of Men is an undeniably entertaining art film and artfully entertaining movie that would make the short list of best pictures in any year.