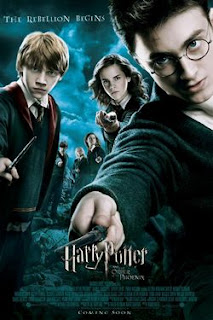 Harry Potter (Daniel Radcliffe) enters his fifth year at Hogwarts School of Witchcraft and Wizardry with something of a bad attitude. He’s spent another miserable summer with his sour and despicable relatives, the Dursleys, and none of his friends, especially Hermione Granger (Emma Watson) and Ron Weasley (Rupert Grint), had the decency to contact him. Feeling hungry and edgy for news from the magic world, Harry discovers that his friends have been keeping secrets from him, and Harry’s anxious to know if there is any news about the activities of the recently revived Lord Voldemort (Ralph Fiennes).

Returning to Hogwarts isn’t any relief. The new “Defense against the Dark Arts” instructor, Dolores Umbridge (Imelda Staunton) is a notorious busybody intent on bending both faculty and staff to her iron will. She does her best to discourage spell-casting and any discussion of Voldemort, who is often referred to as “He who must not be named.” Harry, however, gathers a small, loyal group of classmates and trains them to be his secret army for when (not if) Voldemort strikes. Harry also meets the remnants of the Order of the Phoenix, an organization founded by Albus Dumbledore (Michael Gambon) to counter Voldemort. Still, most of the magic community is willfully blind to the signs that Voldemort is rebuilding his army, and Harry isn’t sure that his own small army will be up to the task of stopping the Dark Lord.

The film’s opening act is fast paced and edgy, and the last act is killer. In between are some truly exciting and thrilling moments, but most of the middle involves the tiresome subplot which sees Dolores Umbridge take on the status quo at Hogwarts. The Umbridge character as portrayed in the film is annoying, and not always in an entertaining manner. When Voldemort attacks in the last act, the appearance of the dark lord almost makes me forget the dour Hogwarts segment… almost.