Chilling "The Cove" is also Thrilling 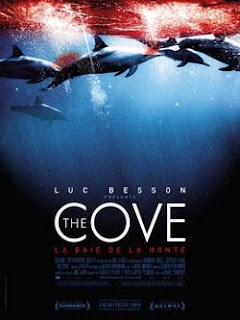 The Cove is a documentary film that depicts the annual killing of dolphins at Taiji, Wakayama, Japan. The film won the Oscar for “Best Documentary, Features” at the 2010 (82nd Annual) Academy Awards. The Cove follows former dolphin trainer, Ric O’Barry’s quest to document the capture and slaughter of dolphins at Taiji, as part of a larger plan to end the capture of dolphins worldwide. O’Barry captured and trained the five dolphins used in the 1960s television show, Flipper.

After meeting O’Barry, former National Geographic photographer, Louie Psihoyos, founder of the Oceanic Preservation Society, decided to get involved with O’Barry’s cause. Psihoyos and a crew traveled to Taiji in 2007. There, using underwater microphones and high-definition cameras, they secretly filmed the slaughter of dolphins in an isolated cove.

The best part of The Cove, indeed, the key to its power, comes near the end of the film with the playback of the video featuring the killing of the dolphins. I don’t know if I was more shocked at the blood in the water or the dolphins’ thrashing. The blood was so thick that the pink-colored water looked like some kind of shake or malted drink. The film’s musical score by J. Ralph creates suspense and tension with stunning precision, while also being the perfect musical accompaniment to savage, senseless murder.

Before that sequence, much of the film focuses on three other themes or elements. First, the film details the task of getting by authorities in Taiji and setting up recording equipment, which is fun to watch. It has an almost special ops quality to it and reveals the tight filmmaking chops of Psihoyos and film editor, Geoffrey Richman.

The film also focuses on the prevalence of mercury in dolphin meat, in amounts far higher than is acceptable for human consumption. That’s interesting, but the film seems to lose its focus when it goes off on its mercury tangent. Another important element in the film is the focus on the role governments, environmental organizations (which is surprising), and groups from various industries play directly or indirectly in the slaughter at Taiji.

It is good and important that The Cove exists. I’m sure that there are a lot of people who do not know that this is happening. I didn’t until I first heard of this film. Is The Cove one of those so-called “important films?” The answer is a resounding yes. This film is important because what is happening in that cove at Taiji is a reflection of what we are doing to our planet, specifically the world’s oceans and the fish population.

Right now, we can be entertained by The Cove because it is a good movie. We’ll cry later because it will be a warning we ignored.