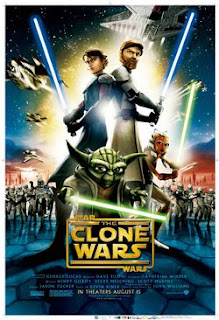 As the film opens, the Clone Wars sweep through the galaxy, and the Jedi Knights are struggling to maintain order and restore peace, as more and more systems side with the Separatists. Darth Sidious (Ian Abercrombie) and his Sith partner, Count Dooku (Christopher Lee), continue to ferment dissension in the Republic; they are the puppet masters behind the Separatist movement and its Droid army.

Count Dooku and his assassin, Asajj Ventress (Nika Futterman), have orchestrated the kidnapping of the infant son of crime lord Jabba the Hutt (Kevin Michael Richardson). Desperate to have access to the shipping lanes on the galaxy’s Outer Rim, which Jabba controls, the Jedi Council pledges to rescue Jabba’s kid, Rotta the Huttlet (David Acord). This mission with its far-reaching consequences is passed off to Jedi Knights, Obi-Wan Kenobi (James Arnold Taylor) and Anakin Skywalker (Matt Lanter), who are on the frontlines of the Clone Wars.

These two Jedi already have their hands full battling a seemingly endless droid army, with only a small, valiant contingent of clone troops, led by Captain Rex (Dee Bradley Baker), on their side. It’s more than enough that Obi-Wan and Anakin find themselves both fighting the droid army and launching a rescue mission, so when Anakin learns that Master Yoda (Tom Kane) has assigned him a padawan learner, a young female named Ahsoka Tona (Ashley Eckstein), he’s not happy. Meanwhile, Dooku and his agents will stop at nothing to foil the Jedi and their desperate, multi-faceted mission.

Star Wars: The Clone Wars is a computer-animated (or 3D animated) film, and its animation certainly looks wanting when compared to the work of such 3D animation studios as Pixar (Toy Story), DreamWorks Animation (Shrek), and Blue Sky (Ice Age). Early in the movie, The Clone Wars’ animation looks stiff, chunky, and even clunky, but as soon as my mind adjusted to the unusual look of this style of 3D animation, it actually began to look charmingly distinctive.

The look of the animation aside, what makes Star Wars: The Clone Wars such a winning film is, honestly, the action. The screenplay fashions a fast-paced narrative that constantly moves the viewer from one end of the galaxy to the next, with the capitol at Coruscant being the anchor (and there’s big action going on there, too). We’re treated to lively battle scenes and heady duels, and while the film lacks strong characterization and personality development of its characters, the film keeps them too busy fighting for their lives and their cause for us to really care.

This is also the first film that really allows Anakin Skywalker to stretch his wings and actually show (rather than tell) us how good a pilot and what a capable Jedi he is (which Obi-Wan Kenobi told Luke Skywalker way back in the original Star Wars). In a lot of ways and unlike any of the prequel trilogies, this is Anakin’s film. The character, after seeming mostly wooden in the prequel trilogy, is charismatic, bold, and brazen in Star Wars: The Clone Wars – a pointed contrast to the mannequin-like performances of the two human actors who played Anakin in the prequel films.

Back in 1999, Ewan McGregor, who portrayed Obi-Wan, described Star Wars: Episode I – The Phantom Menace as being like a fairy tale about a group of heroes flying from one end of the galaxy to another and having adventures. That’s Star Wars: The Clone Wars; it’s a little sci-fi fairy tale adventure – a Saturday morning cartoon version of Star Wars. This is indeed an imperfect flick, but it happily takes the dark out of Star Wars and replaces it with fun.