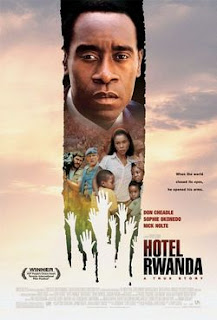 Hotel Rwanda is kind of an African version of Schindler’s List. Some background – in 1994, the African nation of Rwanda, a former Belgian colony, was in a state of civil war with internecine tribal fighting between the majority Hutu and minority Tutsi. When Belgium ruled the colony, they used the supposedly lighter-skinned Tutsi to rule the land, but when the Belgians exited the country, the left it to the Hutu. The allegedly dark-skinned Hutu were incredibly embittered of their treatment by the Tutsi during colonial rule, so when Tutsi rebels began fighting the Hutu government, Hutu hatred of the Tutsi grew exponentially. Members of an ethnic Hutu militia called the Interhamwe armed themselves with machetes and attacked Tutsis and Hutus sympathetic with them.

When the President of Rwanda’s (a Hutu) plane was shot down by Tutsi rebels after he signed a peace accord with them, the country fell into utter chaos, and the Interhamwe went on a Tutsi-killing spree that left almost a million people dead when the slaughter ended in July 1994. In an era of round-the-clock news and burgeoning high-speed communication, the genocide went almost unnoticed. Western Europe and the United States did not want to intercede in the conflict between the Hutu government and Tutsi rebels even to stop the ethnic cleansing of Tutsi’s by the Interhamwe (how much control the Hutu government and military had over the Interhamwe is open to debate).

Hotel Rwanda is based upon the true story of Paul Rusesabagina (Don Cheadle in an Oscar-nominated performance), who was the manager of a Belgian-owned hotel called the Milles Collines in Kigali, Rwanda. Inspired the love of his family and the encouragement of his wife Tatiana (Sophie Okonedo in an Oscar-nominated supporting role), Paul uses the Milles Collines to shelter Tutsis and Hutus who are sympathetic to them. After the massacre of Tutsi begins, the French and Belgian armed forces eventually arrive to safely transport whites from the hotel, but they refuse to assist the Rwandans. Feeling betrayed by the whites for whom he worked so hard, Paul uses all his smarts and wiles to keep the Interhamwe and Rwanda military from taking his remaining hotel “guests” (Tutsi and Hutu) and killing them all. By the time all is said and done, Paul saves 1268 people. Hotel Rwanda is his story of survival and how he helped others survive at the cost of his and his family’s lives.

Directed by Terry George, Hotel Rwanda is simply a powerful film. As a drama, it is also a powerful film thriller, as riveting as any scary movie or special effects laden action flick. George and actor Don Cheadle never let the audience forget that there isn’t a minute that goes by when the occupants of the Milles Collines are not in danger. The script, co-written by George, is good, but George’s direction and the rhythm he uses to create a seamless advance of the narrative carry with it the film’s dominant theme – Paul Rusesabagina’s determination to save lives because he believes people should not merely be murdered by the whim of ignorant bigots, no matter how big a majority the bigots may have. With quiet grit and determination, Cheadle reveals the tale of strength in his face and in his entire body. He doesn’t look like he’s acting; he looks like a man on a holy mission. Sophie Okonedo as Tatiana gives a good performance (which occasionally seems a tad too thick), and Nick Nolte’s performance isn’t great, but whenever his Colonel Oliver is onscreen, the character fits and his presence is really needed – both in the fiction and in the filmmaking.

Hotel Rwanda, however, does play with a double-edged sword. It’s hard to believe that anyone could make a PG-13 movie about genocide, but George does. With that rating, he makes the film accessible to the young people who should see this, but might not be able to view R rated films. However, the genocide in Rwanda 1994 needed the kind of visual brutality that Steven Spielberg used so well in Schindler’s List. George compensates by making Hotel Rwanda as much about Rusesabagina’s story as it is about the genocide, which keeps the drama from being a documentary. Still, anyone who likes powerful, superbly made dramas that also portray acts in human history that must be recorded in fact and told as art and fiction, movies like Schindler’s List and The Killing Fields, will not only enjoy Hotel Rwanda, but must also see it.