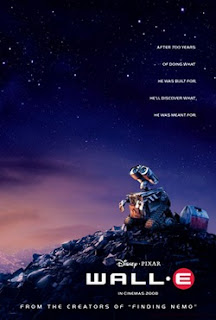 ANIMATION/SCI-FI/DRAMA with elements of action and comedy

In terms of American animated films, WALL-E, a film from Pixar Animation Studios, is a visionary work, and even considering the few exceptional films released in 2008 (like The Dark Knight), WALL-E was the best film of that year. It is the extraordinary story of a lonely little robot that has been doing what he was built for until he accidentally discovers a new purpose in life when he falls in love.

WALL-E is set centuries in the future on a ravaged Earth, devoid of vegetation and with its cities now largely empty ruins. Mountains of garbage, waste, junk, etc. cover the planet, and humans long ago fled the planet in spaceships that resemble cruise-line ships. Left behind to clean up the mess are small robots with melancholy binocular eyes called Waste Allocation Load Lifter Earth-Class or WALL-Es, for short.

For hundreds of lonely years, one WALL-E (Ben Burtt) has been compacting garbage into small cubes and piling them up until they form skyscraper-like heaps. WALL-E also collects knick-knacks, keeps a plucky cockroach as a pet, and obsesses over the 1969 film, Hello, Dolly. WALL-E’s life changes when he meets a strange new visitor to the planet, an advanced probe robot called Extraterrestrial Vegetation Evaluator or EVE (Elissa Knight), and falls in love with the sleek female robot at first sight. After EVE comes to realize that WALL-E has inadvertently stumbled upon the key to the Earth’s future, she races into space to return to the human flagship, the Axiom, where she will report her findings. Meanwhile, the smitten WALL-E has followed her.

WALL-E has the usual ingredients of that help make Pixar movies such huge hits, like exotic settings, splendid storytelling, winning characters and quirky but charming concepts. What makes WALL-E even more special is that it is the first Pixar film that is also a cautionary tale. The film assaults so many things that we hold dear: our materialism (as exemplified by the world-controlling mega-corporation, BnL or “Buy n Large”), gluttony (which results in obesity), our throwaway lifestyle (thus, the piles of garbage), and the instant gratification that high-tech gadgets offer.

This is the kind of thoughtful science fiction that American audiences rarely get. Director Andrew Stanton and his co-writers, Jim Reardon and Pete Docter, tackle our modern malaise and short-sightedness, the grasping corporation with their voracious appetites for wealth in almost any form, and our insipid and incompetent politicians.

Yet WALL-E, like other Pixar flicks is inimitably entertaining. All the robots, not just WALL-E and EVE, have such sparkling characters. Perhaps, that is the true magic of Pixar, the ability to fabricate humanity in any fictional characters – from a pack rat robot that picks up garbage and collects odds and ends to a busy-body sanitation robot neurotically cleaning contaminants. The voice performances (especially Ben Burtt’s) make all the characters, even the robots, seem uncannily human. The eventual robot mini-rebellion, which is a much smarter spin on man vs. machine than even The Terminator or The Matrix, provides the frenetic action-comedy that Pixar films always offer.

Thomas Newman’s exuberant score is consistently pitch perfect. It gives color to the film’s silent movie-like first act and helps brings the budding romance of WALL-E and EVE to life. Newman’s compositions turn the drama, conflict, and tension of the last half-hour into a whirlwind of action that just might take your breath away.

What else can I say? As usual, Pixar delivers, but this time WALL-E is especially special. It tells a wonderful love story, and asks us to love our world and to take care of ourselves. This is a visionary work.