"The Pursuit of Happyness" a Sterling Debut for Jaden Smith 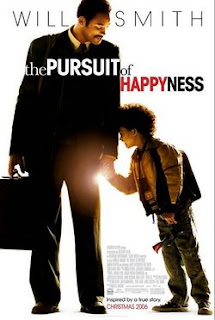 If an actor is going to star in an important, inspirational film that is based upon a true story of triumph over adversity, and that film is also bait for an Oscar nomination (or two), then, the least that actor can do is give a knockout performance. Will Smith does just that in his new movie, The Pursuit of Happyness.

In this fictional version of a true story, Chris Gardner (Will Smith) is a family man struggling to make ends meet as a marginally employed salesman. Linda (Thandie Newton), the mother of his five-year old son, Christopher (Jaden Christopher Syre Smith), is struggling to keep the family afloat by earning income in a dry cleaning factory. When Linda finally buckles under the constant financial pressure, she leaves for New York, but Chris won’t let her take their son with her.

Bright, talented, and ambitious, Chris wins a spot as an intern at a prestigious San Francisco stock brokerage firm, but the internship doesn’t come with a salary. However, the internship might land Chris a coveted, high-paying position as a broker at the firm. In the meantime, without a paying job, Chris and Christopher are soon evicted from their apartment and later from a motel. Forced to live and sleep in shelters, bus stations, bathrooms, etc., Chris remains a committed and loving father to his son while working hard to be the one intern out of the six-month program who gets a job.

Will Smith gives a stinging performance in The Pursuit of Happyness (the misspelling of “happiness” is deliberate and relates to a pivotal scene), one that is free of the genial, cocky, smart-mouthed guy that usually shows up in a Smith performance. It’s rare to see a subtle performance that embodies in equal measure hope and despair or confidence and resignation. Smith is clearly as hungry to be taken seriously as an actor as his character Chris is hungry to get a good job, and that’s the obvious hook of the movie.

The Pursuit of Happyness is directed by a foreigner, Gabriele Muccino, an Italian who has received good notices for his recent films. Because Muccino is not an American, he probably understands the spirit of the American dream better than many Americans, but he also understands the universal elements of the tale, which Chris Gardner’s wants and desires and he and his son’s plight – homelessness and financial struggles are. Muccino and writer Steven Conrad quietly but decisively compare the way Chris lives to that of the people with whom he starts to associate once he begins his stockbroker internship. Muccino even gets in a few digs at America for being so wealthy, yet having so many homeless people that there aren’t enough shelters for them.

Still, in the end, any claim to greatness that this film has rest on Will Smith. Yes, his real life son Jaden Christopher Syre Smith is very good as Christopher Gardner. Thandie Newton also takes the small, almost throwaway part of Linda and makes it stick for as long as she and the character are in the story. But this is Smith’s show, and he makes the pain of a man trying to crawl out of the nightmarish cracks that riddle the American dream authentic.

If the audience isn’t paying attention, they’ll miss the best part of Smith’s performance – that even a man with nothing in terms of material wealth can still honor his commitment to his children and just be a great dad. Chris Gardener wants to have a really good job so that he can provide his son with the finer things in life. He doesn’t need to love his son any more than he already does, and his son says quite firmly at one point during their homelessness that Chris is a “good papa.” That makes the triumph of The Pursuit of Happyness even sweeter.

NOTES:
2007 Academy Awards: 1 nomination: “Best Performance by an Actor in a Leading Role” (Will Smith)

2007 Golden Globes: 2 nominations: “Best Original Song - Motion Picture” (Seal-music/lyrics and Christopher Bruce-music for the song "A Father's Way") and “Best Performance by an Actor in a Motion Picture – Drama” (Will Smith)

Posted by Leroy Douresseaux at 7:13 PM