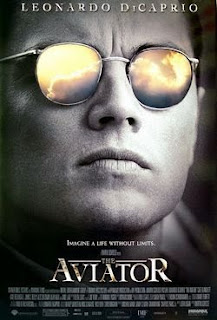 Martin Scorsese’s The Aviator recounts the years of Howard Hughes’ (Leonardo DiCaprio) life from the late 1920’s to the late 1940’s. In that epoch, the eccentric billionaire industrialist was a Hollywood film mogul producing scandalous and infamous films. However, he was best known even in Hollywood as the daring pilot who was test flying innovative aircraft he built and designed. The film begins with Hughes’ four-year odyssey making his war epic film, Hell’s Angels, and ends with him preparing to take the next big steps in aeronautics after the successful flight of his giant wooden plane he called The Hercules, but others derogatorily called the Spruce Goose. In between, the wealthy playboy has passionate but doomed affairs with legendary actress Katherine Hepburn (Cate Blanchett) and the no-nonsense, independent starlet, Ava Gardner (Kate Beckinsale). Hughes, owner of TWA (Trans World Airlines), also has a feud with Juan Trippe (Alec Baldwin), owner of Pan Am Airlines, and Senator Ralph Owen Brewster (Alan Alda), a Maine senator in Trippe’s pocket.

The Aviator has three things going for it. First, it’s a brilliant technical achievement in terms of its special effects and photography (easily the year’s best). Secondly, Martin Scorsese’s directorial effort is spectacular, not in terms of being showy, but because of his choices. For instance, he designed each year in the film to look just like color film from that time period would have looked. The photographic color technique actually drives the film narrative forward. Whereas, his 2002 film Gangs of New York, fell apart by basically tacking on a fourth act, The Aviator almost, but doesn’t fall apart by the end of it’s nearly three-hour running time. The Aviator is lively and energetic, and, at times, seems as if it is actually a film made in the golden age of Hollywood. Only a few moments of weirdness (especially an ending that hints at or suggests Hughes ultimately disintegration) hamper (barely) the film. Still, the good moments, such as the aerial scenes, both flights and crashes, may finally earn Scorsese an Oscar. [It didn't; Clint Eastwood won for Million Dollar Baby.]

The acting more than anything else makes this a special film. It goes without saying that Leonardo DiCaprio gives a great performance. He makes Howard Hughes his own, and turns him into a magnetic presence that stalks the film stage as if he were the king of the world. However, it is Hughes’ mentally unstable side that hamstrings DiCaprio’s performance. That part of the act is more odd and embarrassing than skillful. Although I personally don’t like people imitating Katherine Hepburn, Cate Blanchett does a fine job turning a caricature into an engaging, three-dimensional character. However, Kate Beckinsale’s turn as Ava Gardner is a scene-stealer, and Ms. Beckinsale makes Ms. Gardner an intriguing and appealing figure. Suffice to say, the rest of the supporting cast also go a long way to making this a cinema must-see.