The Hurt Locker: Do Believe the Hype 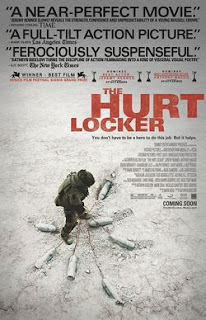 When the 2010 Academy Awards ceremony was over, The Hurt Locker, an independently produced war movie set in Iraq, was named “Best Picture” of 2009. The film’s director, Kathryn Bigelow, became the first woman to win the Oscar for “Best Director.” That would have seem unlikely just two years earlier because films about the war in Iraq were failing at the box office and getting mostly mixed reviews from film critics. The Hurt Locker is special, however; it is truly a great film.

The Hurt Locker is set in the summer of 2004. Sergeant JT Sanborn (Anthony Mackie) and Specialist Owen Eldridge (Brian Geraghty) of Bravo Company are part of a small counterforce specifically trained to deal with the homemade bombs know as IEDs (Improvised Explosive Devices), and they’ve just lost their team leader. The officer who takes over the team, Sergeant First Class William James (Jeremy Renner), shocks Sanborn and Eldridge with how he simply disregards military protocol and basic safety measures. Depending upon one’s perspective, James is either a swaggering cowboy looking for kicks even when the margin of error is zero, or he is the consummate professional, meticulous in the mastery of his treacherous craft.

Sanborn and Eldridge have only 38 days left in their tour of Iraq, and if they are to survive that remaining time, they must learn to understand James and to work with him, even if they cannot contain him or control his behavior. With each mission seemingly more dangerous than the last, James blurs the line between inspiring bravery and reckless bravado, and for Sanborn and Eldridge, it seems as if it is only a matter of time before disaster strikes.

If someone asked me if I were surprised at how good The Hurt Locker is, I would say yes. If someone asked me if I were surprised that Kathryn Bigelow could make a film as good as The Hurt Locker, I would say no. Prior to this film, Bigelow had shown a penchant for tense thrillers (Near Dark) and evocative character drama (The Weight of Water), and The Hurt Locker is a taut, riveting, psychological thriller, rich with resonant character drama. This film is a confluence of events, in which a great script needed a skilled and talented director to turn it into an incredible film.

In fact, everything about The Hurt Locker is superbly done. The script by Mark Boal, who was an imbedded journalist in Iraq in 2004, is one of those screenplays that is a memorable story of war because it is also an incredible story not about the war, but about the young men on the ground fighting it. Bigelow transforms the power of Boal’s screenplay (which eventually won an Oscar) into a film that captures Boal’s spellbinding story of unique warriors.

This film feels explosively real because Bigelow gets great performances of her characters, especially the Bravo company trio of James, Sanborn, and Eldridge. Jeremy Renner makes James’ addiction to his job and the way he does it a beautiful, mesmerizing thing. The underrated and underappreciated Anthony Mackie is consummate in his depiction of the by-the-book Sanborn. Brian Geraghty is a delight as the conflicted, boyish Eldridge.

Kathryn Bigelow and her creative crew and collaborators turned the war film into art. Bigelow’s actors made The Hurt Locker the great modern war film about modern war. In their performances, they say everything about war and about the kind of war that is Iraq without being political.