"The Twilight Saga: New Moon" Down with Love 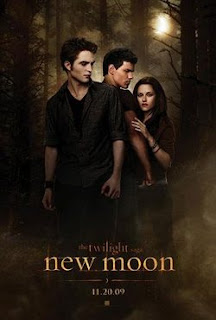 DRAMA/FANTASY/ROMANCE with elements of action and horror

New Moon opens on Bella’s (Kristen Stewart) 18th birthday, a day about which she is not particularly crazy. That evening, Edward’s (Robert Pattinson) family, also vampires, throws a birthday party for Bella, which starts nicely, but takes a shocking turn. Following Bella’s ill-fated birthday party, the Cullens abandon the town of Forks, Washington, in an effort to protect Bella from the dangers inherent in their world. The most shocking blow: Edward breaks up with Bella.

Heartbroken and depressed, Bella sleepwalks through the first half of her senior year of high school, totally shutting out her other friends. When her father, Forks Police Chief Charlie Swan (Billy Burke) demands that his daughter make a change, Bella goes on a date night with a girlfriend. It is on that night that Bella discovers that Edward’s image comes to her whenever she puts herself in jeopardy. Determined to see this vision more often, Bella begins to concoct ways that will put her life at greater and greater risk.

Bella seeks out childhood friend, Jacob Black (Taylor Lautner), a member of the local Quileute Native American Indian tribe. A gifted mechanic, Jacob refurbishes an old motorbike that Bella will secretly use to put herself in danger. Something else surprising happens when Bella finds herself drawn to Jacob, a formerly scrawny boy. He is literally growing taller and more muscular (with killer washboard abs) every day and right before Bella’s very eyes. Jacob, however, also has a shocking supernatural secret of his own, which causes a rift to grow between him and Bella. Then, Edward’s sister, Alice (Ashley Greene), returns, seeking Bella’s help in saving Edward’s life, and the rift grows wider.

Like Twilight, New Moon is based upon a novel by Stephenie Meyer (The Host). Obviously, in the translation from novel to film, plot elements and scenes from the book are left out or changed in the film. However, screenwriter Melissa Rosenberg (who also adapted Twilight) retains the central themes, as well as the spirit, of the source material. The novel asks probing questions, such as: after the euphoria of new love, what is real about this relationship? What do Bella and Edward want of each other? What are their motivations, and how much are they willing to fight for their relationship? Just how deep and strong are Bella’s feelings for Jacob? The screenplay keeps those questions at the forefront of the narrative.

And speaking of fight, director Chris Weitz, an established Hollywood filmmaker (About a Boy, The Golden Compass), doesn’t fight the love story at the core of this franchise. New Moon may be filled with thrilling chases and riveting hunts in the forests around Forks. It may carry viewers breathlessly across the world, only to drop them in the mysterious world beneath a rustic Italian town. Weitz still manages to emphasize the ache and yearning of a young love blazing so brightly that it threatens to burn itself out.

The reported increase in the production budget for New Moon (as compared to Twilight), is evident in the flashy visual special effects. The werewolves are in a word – awesome. The spectacular cinematography is pitch-perfect in capturing the right mood and look for every setting in the film: from the forests surround Forks to the murky nights of Port Angeles. An improvement in the art direction also makes even the Swans’ humble home seem cosmopolitan.

New Moon is not perfect. Under Weitz’s direction and Peter Lambert’s editing, the film often moves too fast, sometimes hopping around like someone high on stimulants. Still, this film works. In the intimate moments when the actors, especially Stewart, Pattinson, and Lautner, convince us that they know these characters and that they are going to make the story real for us, New Moon seems less like a fantasy and more like a real love story.

Posted by Leroy Douresseaux at 9:23 AM