Review: "The Fast and the Furious: Tokyo Drift" is Extra Special Fast and Furious 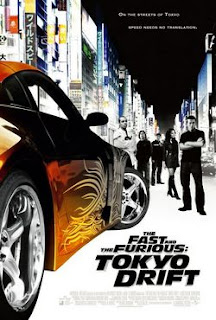 Sean Boswell (Lucas Black) is an Alabama-born teenager who defines himself as the hotheaded outsider – basically a loner at his suburban high school. He’s also a hotshot street racer, and it’s car racing that lands him in trouble with the law… again. To avoid going to jail, Sean’s mother (Lynda Boyd) sends him to Japan to live with his estranged father, Major Boswell (Brian Goodman), a gruff, career Navy officer living in Tokyo. Here, Sean’s also an outsider, a gaijin, but he eventually makes a new friend, Twinkie (Bow Wow), a fellow military brat who hustles American goods such as sneakers and electronics to local youths anxious to have hot American items. Twinkie introduces Sean to the underground world of drift racing. In Tokyo, the drag racing Sean loves is replaced by the rubber-burning, automotive art of balancing speed and gliding through a heart-racing course of hairpin turns and switchbacks – drifting.

His first night at a drifting event, Sean catches the eye of his classmate, Neela (Nathalie Kelley), but Neela has a boyfriend, a local self-styled crime kingpin, Takashi, better known as “DK” (Brian Tee) or Drift King. Sean’s attraction to Neela brings he and DK into immediate conflict. DK challenges Sean to a drift race, and Han (Sung Kang), a criminal associate of DK’s, loans his car to Sean. The race finishes in a disaster for Sean who has never drifted before. However, Han takes Sean under his wings, teaching Sean to drift while Sean pays Han back for the wrecked car by working as his driver and pickup man. However, things don’t cool off between DK and Sean, and DK also has a falling out with Han. Soon, matters escalate into violence, and DK’s uncle (Sonny Chiba), an authentic Yakuza boss gets involved. To settle the dispute, Sean challenges DK to a race in which resolution will be reached man-to-man and car-to-car in the ultimate drift.

The Fast and the Furious: Tokyo Drift is just as much fun to watch as the previous two films in the franchise. Although it isn’t quite as good as the original, The Fast and the Furious, it may be a technically better made film than 2002’s 2 Fast 2 Furious. Director Justin Lin (Better Luck Tomorrow, Annapolis) loves filming racing scenes way more than he concerns himself with developing characters and narrative. I lost count of the character moments in which half or all of a scene was out of focus. Still, Lin provides enough male bonding, teen romance, youth melodrama, and family dysfunction to make us at least somewhat interested in the character scenes that are just filler between racing sequences.

And that’s what this flick is – a racing movie. The Fast and Furious: Tokyo Drift exists to give us the vicarious thrill of living through underground, illegal, street racing – sexy cars and dangerous, mind-numbing, brain-freezing speed. This is one of those “ultimate summer movies,” made for all the young male demographics from nine (despite the rating) to 35. If you’re older than that and know how not to take every movie seriously, Tokyo Drift will make you feel young again and want to be with all those hot Asian chicks in the film.

Best thing about this movie is that none of the racing scenes are CGI; no computers were harmed in the making of these furious races through the night streets. Lin uses professional drift racers to deliver all the races, high-speed chases, and crashes you could want, and then throws in more. He also gives Tokyo’s night life: underground clubs, backroom parlors, and smoky dens of iniquity where criminals hide a glossy, candy coating that would be right at a home on MTV. Yes, indeed, The Fast and the Furious: Tokyo Drift is pure summer fun: fast cars, fast girls, fast life, and dangerous hoods. It’s the high art of junk culture, and too bad there isn’t a special Oscar for movies like this.

Posted by Leroy Douresseaux at 2:51 PM