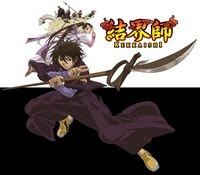 KEKKAISHI is based on the hit manga series by Yellow Tanabe (also published in North America by VIZ Media). A story of mystical forces powerful in the region known as Karasumori. For over 400 years, it has been the duty of a clan of “kekkaishi”—barrier masters—to guard this land and exterminate the supernatural creatures that are drawn to it night after night.

Yoshimori Sumimura is a junior high school student at Karasumori Academy, which is built upon the Karasumori grounds. By night, Yoshimori follows the tradition passed down through generations and fulfills his destiny as the twenty-second “kekkaishi” of the Sumimura clan. But by day, Yoshimori's got other demons to contend with, like an obsession with cake making and a seriously crotchety grandfather! Yoshimori's pretty neighbor, childhood friend and rival, Tokine Yukimura, is also a “kekkaishi,” but their families are caught up in a feud over who is the true practitioner of the art. Protecting ordinary people from the ever-present danger of the Karasumori grounds, Yoshimori will continue to grow stronger as he battles the forces of evil again tonight!

For more information on the KEKKAISHI anime and manga series (both rated “T” for Teens), please visit www.ShonenSunday.com or http://www.viz.com/.
Posted by Leroy Douresseaux at 1:45 PM