"Near Dark" a Unique Vampire Flick 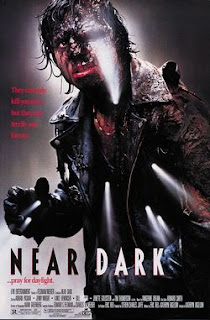 Caleb Colton (Adrian Pasdar), an innocent Texas country boy encounters a mysterious beautiful girl named Mae (Jenny Wright) one dark summer night. A night of kissing and necking turns weird when Mae bites Caleb. When the first rays of morning arrive, Caleb discovers that the sunlight burns his skin. Before long, the girl returns with her “family,” a band of outlaws, and kidnaps Caleb, but these aren’t just any outlaws. They’re a vicious pack of vampire drifters, and Mae has seduced Caleb into their hellish lowlife of murderous mayhem and ceaseless evil. Led by a soulless murder named Jessie Hooker (Lance Henriksen), who claims to have fought in the Civil War, these killers sate their bloodlust in the most brutal fashion. Now, Caleb’s father, Loy (Tim Thomerson), and young sister, Sarah (Marcie Leeds), travel across the dusty heart of the American southwest looking for him, but will his new “family” let him leave.

The bankruptcy of its distributor assured that Near Dark would flop at the box office. However, its subsequent release on VHS introduced many to what remains one of the most original vampires movies. Director/co-writer Kathryn Bigelow and co-writer Eric Red originally conceived this film as a Western, and it also retains some of that flavor. There aren’t any great performances, although Bill Paxton brings an air of fun to this gruesome narrative as the gleeful killer, Severen.

What is memorable is Near Dark’s gritty realism, jagged pace, its thick layered nights, the raw gun violence, and how Bigelow makes the sun seem so darn terrifying every time it comes roaring back to dispel the inky blackness of night. Although the film never uses the word “vampire,” Near Dark stands as a unique treatment of the vampire story. Those final images of Jesse and his down-and-dirty lover, Diamondback (Jenette Goldstein), burning in their funeral pyre are fine art.