Review: "Quantum of Solace" Finds James Bond with a Hard-On for Payback 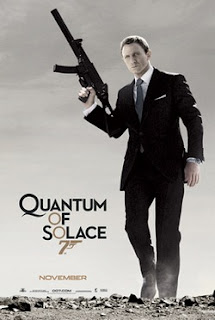 The 2006 version of Casino Royale rebooted the James Bond film franchise. The follow up film, Quantum of Solace (the 22nd Bond film), is a rough and tumble, rip-roaring action movie that is probably more Jason Bourne than it is James Bond. Still, this is a very good action thriller.

Quantum of Solace continues immediately after the events of Casino Royale. James Bond (Daniel Craig) rushes the captured Mr. White (Jesper Christensen) to Siena, Italy, where Bond and M (Judi Dench), his M16 superior, will interrogate White. The interrogation is interrupted, however, by a double agent. Bond follows the trail of the double agent to Dominic Greene (Mathieu Amalric), the charismatic leader of an ecological organization called Greene Planet. Behind Greene Planet’s seemingly legitimate business interests and benevolent aims hides Quantum, a powerful terrorist organization plotting to overthrow the government of Bolivia.

For Bond, this mission is as much about vengeance as it is about duty. Quantum is also connected to the death of the woman Bond loved, Vesper Lynn, (who betrayed him and died in Casino Royale). In Bolivia, Bond is joined by Camille Montes (Olga Kurylenko), a young woman hunting the murderer of her family, Bolivian general, Medrano (Joaquín Cosio), and a co-conspirator of Greene’s. As he gets closer to finding the man responsible for the betrayal of Vesper, Bond leaves a pile of bodies in his wake, and soon the CIA and his own agency are hunting him.

By now, moviegoers are used to the fact that the Daniel Craig James Bond is not the “shaken, not stirred” Bond of the past. Bond is now as much an ass-kicking action hero, leaping and running all over the place, as he is a cool secret agent (if not more). And Quantum of Solace is certainly kick-ass. It isn’t more of the same; the film simply takes the cool action scenes of Casino Royale and multiplies them.

Craig is ultra-cool as the ruthless “blunt instrument,” and his performance here – balancing a broken heart with a barely concealed hard-on for revenge – is tasty. Mathieu Amalric is smashing as Dominic Greene; rarely has such a weasel of a villain been so attractive. Judi Dench and Jeffrey Wright deliver their usually good performances.

From the opening rollicking car chase (one of the best I’ve seen in a long time) to the desert hotel showdown, this Bond packs a wallop. Quantum of Solace lacks the smart elegance of the typical James Bond movie (which even Casino Royale had), but I’ll take solace in this quick, sweet, brutal gem of an action movie.