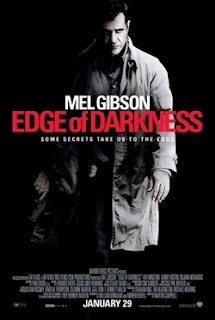 CRIME/MYSTERY with elements of drama and thriller

Mel Gibson’s most recent star vehicle is the film, Edge of Darkness, which is actually a remake of a 1980s British television serial (or miniseries). This film, Gibson’s first movie as an actor since 2002, is ostensibly some kind of crime thriller, but Edge of Darkness is only truly thrilling in the scenes that feature brutal violence, usually in the form of gunfire.

The story focuses on Thomas Craven (Mel Gibson), a veteran homicide detective and a single father. Early in the movie, Craven watches as his only child, 24-year-old Emma (Bojana Novakovic), is murdered on the steps of his home by a masked gunman. His colleagues in the Boston Police Department assume that Craven was the target, and it seems as if everyone else also thinks so. Craven insists that he be part of the investigation, but he soon realizes that he can find no credible evidence that he was really the shooter’s target.

Craven embarks on a mission that slowly reveals parts of his daughter’s life to which he wasn’t privy (such as a boyfriend), but his investigation also leads him into the shadowy world of his daughter’s employer, Northmoor, and creepy company head, John “Jack” Bennett (Danny Huston). Shrouded in mystery, Northmoor has ties to an influential senator, and the corporation’s activities have apparently drawn the attention of Darius Jedburgh (Ray Winstone), a mysterious operative and “cleaner” of some sort. As Craven gets closer to the truth, dark forces begin to align against him, and Craven seems headed for the same fate as his daughter.

The advertisements for this film would lead the viewer to believe that Edge of Darkness is primarily about a determined father relentlessly on the path of his daughter’s killer. It is actually a little more complicated than that and involves government conspiracies, political cover-ups, and international intrigue. This is mildly entertaining, but it really lacks the energy and dramatic tension one would expect of a cop-out-for-revenge drama.

Edge of Darkness does have its shocking moments and a few scenes that provide the kind of edge-of-your-seat suspense a thriller will general supply. However, much of the film is hollow. The complicated, bittersweet relationship between Thomas Craven and his daughter comes across as shallow in most scenes, although the flashback scenes featuring Emma as a child (played by Gabrielle Popa) are genuinely father/daughter sentimental.

Edge of Darkness’ biggest problem is that the characters are more like character types and stereotypes than fully realized characters. The only thing Ray Winstone’s Jedburgh seems to be doing in this story is looking mysterious. Even Mel Gibson’s Thomas Craven is listless, and there are only a few moments when Gibson seems passionate about this character (such as the moment when he asks a thug tailing him, “Did you shoot my daughter?”).

The screenwriters may have tried to pretend that this movie was ultimately the story of a lonely old cop’s search for answers about his daughter’s death as way to both avenge her and to somehow redeem their relationship. Edge of Darkness is really an uninspired, though occasionally pleasurable movie, and it is also nothing special in the exceptional career of Mel Gibson.

Posted by Leroy Douresseaux at 7:07 AM