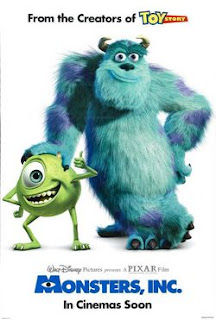 Monsters, Inc. is the fourth collaboration between computer animation studio Pixar and Walt Disney, a match made in heaven that has already produced three brilliant films: Toy Story, A Bug’s Life, and Toy Story 2. Monsters was a safe bet to be a hit, which it is, and it was also a safe bet to be a darned good movie, which it certainly is.

Monsters, Inc. is a utility company that generates its power from the screams of children. James P. “Sulley” Sullivan (John Goodman) is the company’s top scream maker, but during an attempt to help his partner Michael “Mike” Wazowski (Billy Crystal), Sully accidentally lets a human child into the building and all heck breaks loose. Although they depend on children for the power to run their world, monsters are afraid of children. The child, whom Sulley names “Boo” (Mary Gibbs) touches Sulley’s heart, and he’s determined to return her to her bedroom before harm comes to her in the form of Sulley’s chief rival, Randall Boggs (Steve Buscemi).

Monsters employs the same formula that made the previous Disney/Pixar films huge successes. The personable voice talent comes in the form of Goodman and Crystal, who are capable, but are not as engaging as Tom Hands and Tim Allen in the Toy Story films; their performances are closer to the work of Dave Foley in A Bug’s Life. Buscemi, as Boggs, brings a venom filled performance that drips menace much in the manner Kevin Spacey did in A Bug’s Life.

The animation is nice, but the pastel-like tones are often dull in the film. The design of the citizens of Monstropolis, the home city of Monsters, Inc. is, at times, inventive, and at other times, rather ordinary. Most of the creatures seemed to have come straight out of cheap Saturday morning animation.

Where the film really scores is its script and direction. The film is a bit slow in its setup of the story, but the slowness does allow the story to indulge in the idiosyncrasies of its characters. The writers and directors build the tension with a slow burn, the film explodes into an old-fashioned barnburner with a rousing chases that rivals the best of cinema. The movie has the kind of action movie adrenaline hit that you’d get when Indiana Jones chased the trucks in Raiders of the Lost Ark or the pod race in Star Wars Episode One: the Phantom Menace. Pixar gave is previous films the same edge of the seat chase and rescue, which made the film a thrill ride for all ages.

With its sentimental and beautiful ending, Monsters, Inc. easily overcomes any reservations that anyone might have about it. Once again Disney/Pixar has produced a picture worthy of end of year best film lists. Awards usually ignore such films because they’re only animation, and, after all, cartoons are for kids. But the truth is in the result; don’t cheat yourself of this fine movie.

Posted by Leroy Douresseaux at 7:37 PM