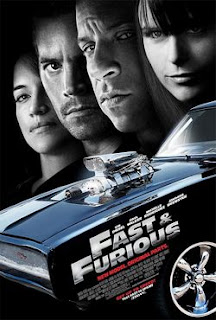 Fast & Furious is the fourth film in The Fast and the Furious franchise, but it is set before the events of the third film, The Fast and the Furious: Tokyo Drift. The plot of Fast & Furious connects with the original 2001 film and actors Vin Diesel, Paul Walker, Jordana Brewster, and Michelle Rodriguez reprise their roles from the first movie. Having them return makes it feel as if this franchise got its mojo back.

Fast & Furious opens with Dominic “Dom” Toretto (Vin Diesel) and his new crew, which includes Letty Ortiz (Michelle Rodriguez), hijacking fuel tankers in the Dominican Republic. A shocking murder brings the fugitive ex-con Dom back to Los Angeles looking for payback against a mysterious drug lord named Arturo Braga. Meanwhile, Brian O'Conner (Paul Walker), the FBI agent who 5 years earlier infiltrated L.A.’s illegal street racing underground, of which Dom was part, is also after Braga. Although he is still feuding with Brian, Dom will have to forge a new trust with the lawman if they are to have a hope of outmaneuvering the wily Braga. As they cross international lines to foil Braga, Dom and Brian are also forced to do what they do best – push the limits of what is possible behind the wheel of an American muscle car.

Even with its explosive beginning and shocking turn of events, Fast & Furious starts off slow. The character drama and set up of the plot are clunky, but the stars rise to the occasion. Fast & Furious, for the most part, is exactly that – fast and furious, so viewers will get what they expect from this franchise, but not exactly. The car chases and races are so fast and crazy that computer generated images obviously played a part in making them. The story is, overall, darker and edgier than ever before. However, Fast & Furious doesn’t seem derivative, even as part of a franchise, and in spite of some occasionally uninspired character moments, it is just plain fun to watch.

I thought I knew how much I missed Vin Diesel and Paul Walker, but I really had no idea. When they’re blazing, these two stars show us why Fast & Furious had to be and why there will be more.