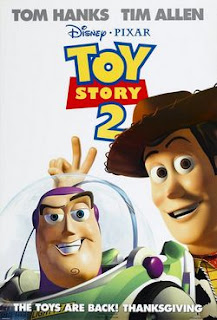 When Al McWhiggin (Wayne Knight), a nefarious toy dealer, steals Sheriff Woody (Tom Hanks), it’s up to Buzz Lightyear of Star Command (Tim Allen) to rescue him. While in captivity, Woody discovers his Howdy Doody-like previous life and his old compadres: Jessie the Yodeling Cowgirl (Joan Cusack), Stinky Pete the Prospector (Kelsey Grammer). But time is running out to rescue Woody. Buzz meets an updated version of himself, Buzz Lightyear II ( Tim Allen), who is mistakenly taken in by the other rescuers. Meanwhile Emperor Zurg (Andrew Stanton), Buzz’s enemy pursues him as he races to rejoin his friends.

With the thrill of an old fashioned serial, fine voice acting talent, and the artistry of Pixar, Toy Story 2 is thrilling tale that can be enjoyed by all ages. The scriptwriters designed a story that is a virtual thrill machine that rivals many more hardcore action movies. However, they didn’t forget the children. There’s plenty of comedy, both low and high, and the guest appearances of many toys, both old and new will keep the kids’ interests.

Toy Story 2 also has many good ideas behind it, issues of growth, responsibility, loyalty, and friendship. In the hands of the talented Pixar crew, they take these ideas and weave a thoughtful and entertaining story. With a cast of excellent dramatic actors, comediennes, and character actors, the story becomes one of the best movies in recent memory. John Ratzenberger as Hamm is as funny as he ever was on “Cheers” as “Cliff” Clavin, Jr. Wallace Shawn’s Rex the dinosaur is a good thing, and in his last role, Jim Varney as Slinky Dog leaves us with one more good time. Don Rickles also entertains as Mr. Potato Head.

There’s magic in this movie – something for young and old. Only narrow minds that perceive any animated movie as being for tykes could ignore the charm and quality of this film. Perhaps the finest computer animated movie of ever, it joins the ranks of the great, animated films.

Posted by Leroy Douresseaux at 10:21 AM