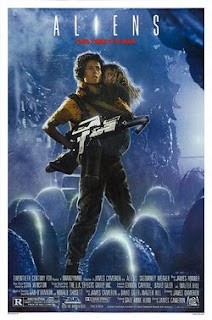 SCI-FI/ACTION/THRILLER with elements of horror

One of the landmark action films of the last two decades is James Cameron’s Aliens. With it’s heart stopping plot twists, quick-cut editing, and nerve shattering suspense, Aliens almost killed the idea of cerebral science fiction films, and, to this day, sci-fi and action are synonymous terms when applied to film.

Aliens is the sequel to the film Alien, the 1979 Ridley Scott film that was easily one of the best of that year and spawned countless imitators. The film also introduced to a larger audience to the work of one of its visual effects creators/designers, European surrealist H. R. Giger (who earned an Academy Award for his work on the picture).

A giant corporation has colonized the planet that first appeared in Alien and where a group of interstellar miners of the Nostromo mining ship encountered the horrific alien life form. When earth loses contact with the colony, they send a group of space marines to learn what’s happened at the colony. Lt. Ellen Ripley (Sigourney Weaver), the only surviving member of the Nostromo crew, goes along as a consultant. The mission turns disastrous after the aliens slaughter most of the marines. Ripley has to use her familiarity with the aliens to lead the rest of the remaining crew to safety, including a little girl who is the sole surviving colonist.

The performances in the film are excellent, in particular Ms. Weaver who’s Lt. Ripley must act as warrior to save her group from the relentlessly attacking creatures and as a mother to the little girl Newt (Carrie Henn). Bill Paxton as the whiny and frantic Pvt. Hudson made his first big screen splash with a wild-eyed, inspired, and memorable performance. Michael Biehn, (as Cpl. Dwayne Hicks), however, should have earned leading man status with his role, but never did, and Paul Reiser (as the dishonest, evil, and murderous corporate weasel Carter J. Burke) was decidedly out of character with the kind of roles that would later make him famous in the early to mid-90’s.

Several filmmakers ably assisted James Cameron in making this film a classic. James Horner’s Oscar-nominated score would be so well appreciated that nearly two decades later, many studios still uses pieces of it as background music in movie trailers and commercials to sell other action, suspense, thriller, and horror films. Stan Winston won one of his several Oscars as one of the SFX artists on this film who adapted Giger’s work from the first film to better suit Aliens, which was more kinetic than its atmospheric predecessor. Film editor Ray Lovejoy’s achievement in helping to create this film’s frantic, breakneck, and breathless pace also shaped how action films would look from then on.

Aliens was the picture where Cameron first started getting notice for the difficulty of his film shoots and for being a hard man to please. He’s a creative director and a great filmmaker, regardless of his temperament. He got the most out of what he had to make a great film, for instance, cutting away and shooting at angles that would hide the fact that many of the actors playing aliens were only wearing half of a suit. It didn’t matter. All that camera movement created the intensity for which Aliens is so celebrated. The film suffers from one of the faults that mar most thrillers and suspense films. It was too long, and, as good as every part of the last act is, it was a bit too much. Lovers of sci-fi, action, thrillers, and horror films, however, should not miss this film.

Posted by Leroy Douresseaux at 11:23 AM