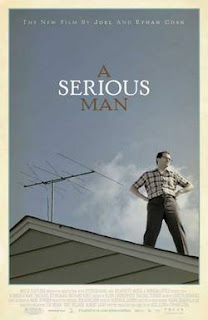 The most recent Academy Award-nominated film from the Coen Brothers (Joel and Ethan) is A Serious Man. This drama and black comedy centers on a Midwestern professor whose constant and unchanging life begins to unravel during a series of unfortunate events.

A Serious Man is set in 1967 in an unnamed Midwestern town. Professor Lawrence “Larry” Gopnik (Michael Stuhlbarg) is a physics professor at a quiet Midwestern university. One day his wife, Judith (Sari Lennick), bluntly informs Larry that she wants a divorce because she has fallen in love with a pompous acquaintance, Sy Ableman (Fred Melamed). In truth, Larry seems to be having problems with all his family: his unemployable brother Arthur (Richard Kind), who sleeps on his sofa; his son Danny (Aaron Wolff) a pot-smoking, discipline problem who shirks Hebrew school; and his vain daughter Sarah (Jessica McManus), who steals money from his wallet in order to save up for a nose job. With all these torments, Larry struggles to be a righteous man – loyal to his family and his faith – a serious man, so he turns to his Jewish faith for answers… with wildly mixed results.

A Serious Man is an odd comedy; at times bleak and at other times surreal, the narrative is thoughtful and philosophical. With humor, both grim and sparkling, Joel and Ethan tackle life’s big questions about family and morality and also about the role of faith as a place to find answers.

A loose take on the story of Job (the Old Testament figure from the Book of Job). A Serious Man sometimes seems like a torture chamber, contrived by the Coens to allow themselves to experiment. They want to speculate about how a successful middle class man might react when everything goes wrong and it seems as if the world, existence, and God have turned against him. To that end, they get a magnificent performance from Michael Stuhlbarg as Larry Gopnick, who turns what could have been a caricature into a mesmerizing everyman who crosses racial, ethnic, and religious boundaries. If this film has a long life, it will be because of Stuhlbarg who made this Jewish intellectual from another era seem like a universal figure.

Sometimes, this movie can be almost too bleak and too belittling of its characters to sit through. Like most movies from the team of Joel Coen and Ethan Coen, however, A Serious Man is beguiling even when it seems intolerable, but worth seeing.