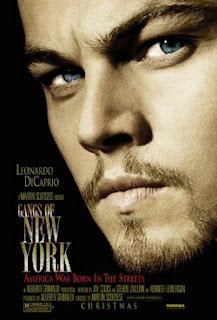 Martin Scorsese’s long-awaited Gangs of New York begins in 1846 with a bloody battle between rival New York gangs that Scorsese films with enough majestic splendor and power to rival an epic battle in one of The Lord of the Rings films. This is an auspicious opening to a wonderful film that just happens to run on a little too long.

Young Amsterdam Vallon watches his father Priest (Liam Neeson, K-19: The Widowmaker), leader of the Irish Dead Rabbits, fall under the knife of William “Bill the Butcher” Cutting (Daniel Day-Lewis, The Crucible), leader of the Nativists. The Nativists, whose parents and grandparents were Americans and who are white Anglo Saxon New Yorkers, look upon the new immigrants, especially the Irish, as foreign invaders, garbage whom must they must subjugate. Truthfully, they’re all poor folks living in the slums in filth and hunger.

In 1863, the adult Amsterdam Vallon (Leonardo DiCaprio, Titanic) emerges from a juvenile home ready to avenge his father’s death. He finds that many of his late father’s colleagues have joined ranks with Cutting’s gang and that Cutting now reveres Priest Vallon as the last great man. Amsterdam hides his identity and joins Cutting’s crew, where he becomes like a son to him, until Amsterdam’s identity is revealed and he has his first bloody confrontation with Cutting.

For most of Gangs, one can’t help but be taken in by the breathtaking and dazzling filmmaking, possible Scorsese’s most invigorating work since Goodfellas

. Superb camerawork by Michael Ballhaus and excellent film editing by Thelma Schoonmaker (both long time Scorsese cohorts) combine their talents with the master’s brilliant sense of design, pacing, and storytelling to form a perfect film. Then, it suddenly goes on past the point where it should have ended – the first confrontation between Amsterdam and Bill the Butcher. Their continued rivalry isn’t boring, but some of other subplots that went with it seem extraneous.

), and Kenneth Lonergan (writer/director of the beautiful You Can Count on Me) is Shakespearean in its approach to character, plot, and dramatization. The story, however, tries to cover all the important national issues of 1863: The War Between the States, immigration, conscription, class conflict, ethnic conflict, racism, slavery, political corruption, police corruption, violence, hunger and poverty, religious conflict, and loyalty and how all these issues intermingle into further conflict. Sometimes, it all seems like so much crap thrown against the wall to see what sticks. All these subplots require a longer film, and Gangs is already two hours and 48 minutes long. This obese screen story is the blemish on what could have been a great film.

Still Scorsese tackles this beast of a script and turns it into a wonderful movie, in part because he draws some great performances from his cast. Day-Lewis is always a pleasure to watch, and he turns Cutting into a complex man worthy of everything between outright loathing and sincere admiration. DiCaprio is the youthful and seething hero and proves, once again, that the screen loves him; you can’t take your eyes off him. He’s the perfect movie star: dazzling, boyish beauty and talent to burn, but envy will deny him the accolades that Day-Lewis will get for this film. Other stellar performances include Cameron Diaz (stop hatin,’ she can really act), the chameleonic Jim Broadbent (always on his game), and Henry Thomas (all grown up since E.T., The Extra-Terrestrial). Gangs of New York is not to be missed; the only regret one can have is how close they all came to getting making perfect.

Posted by Leroy Douresseaux at 8:56 AM