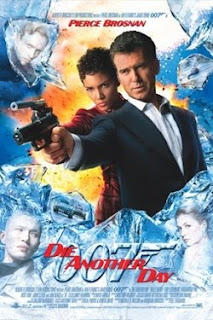 Die Another Day, Pierce Brosnan’s fourth outing as James Bond, Agent 007, is the twentieth film version of Ian Fleming’s classic secret agent/super spy, and many think that the venerable character is showing his age and signs of wear. The issue is merely one of competition. Over the years stunt coordination and computer technology advanced so much that Bond’s low-fi action looked dated next to bigger and louder explosions of other action heroes, secret agents, and troubleshooters.

Die Another Day is high-octane action movie, and it is better than The World is Not Enough and almost as good as Tomorrow Never Dies, the third and second Brosnan Bond films respectively.

The first half is closer in tone to the old Bond. North Korea captures and tortures Bond for 14 months. After his captors work a deal to free him, his masters at M6 cut him loose because they believe the North Koreans broke him during interrogation. Separated from his future tech arsenal and his agency, Bond has to rely on his wits, his smarts, and his experience. The viewer gets to see just how good Bond is and how dangerous a rogue he can be even without an agency to back him. Brosnan was always convincing as Bond. He could be the suave lover and charming chameleon that he needs to be in order to get into places and into people’s heads. Brosnan could also instantly become the ruthless killing machine that is the mark of an agent with a double “O” license.

Much of the second half of the film is borderline, pure sci-fi, but in the hands of Lee Tamahori (Along Came a Spider), the action is intense and has the wall-to-wall ferocity of anime (Japanese animated films) and mania of a comic book. The script by Neal Purvis and Robert Wade, the screenwriters of The World is Not Enough, is well written and does a good job straddling two film genres – espionage and action. Though the movie runs a bit long, the thrills of the second half are well choreographed and relentless.

Die Another Day has some excellent small parts: John Cleese, in his best outing as Q, Judi Dench as the dour M, and Michael Madsen, always a welcome sight as a tough guy, who should have had a bigger part.

The movie is part secret agent thriller and part loud cartoon. I would like to see more of the former, but, on the whole, it is a very entertaining film and a near perfect film for people who just love loud action movies.