"The Karate Kid" is Still a Winner 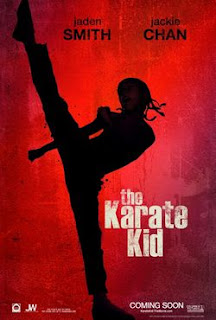 The Karate Kid 2010 is, of course, a remake of the 1984 film of the same name. The new film stars Jaden Smith (son of actors Will Smith and Jada Pinkett Smith) and international martial artist and actor, Jackie Chan. The new film is an absolutely lovable, well-made film that stands on its on and does the original proud. This time, however, kung fu, not karate, is the martial art of choice.

Twelve-year-old Dre Parker (Jaden Smith) moves to Beijing from Detroit with his mother, Sherry Parker (Taraji P. Henson), because of her new job. Dre experiences love-at-first-sight when he sees a young violinist named Mei Ying (Wen Wen Han), practicing in the park, and the feeling is mutual. However, Dre’s feelings for Mei Ying make an enemy of the class bully, Cheng (Zhenwei Wang), a kung fu prodigy and rival for Mei Ying’s affections.

Dre knows a little karate, but it is not enough to help this karate kid from America safely navigate his new home. Cheng uses kung fu to beat the crap out of him. Dre finds a friend and mentor in Mr. Han (Jackie Chan), the maintenance man of Dre’s apartment complex, after he rescues Dre from a beating. After a futile attempt to settle the dispute between Dre and Cheng peaceably, Mr. Han enters Dre in the “Open Kung Fu Tournament” where Dre may face off against his nemesis. Han begins to teach Dre real kung fu, but although he is being trained by a master, Dre realizes that surviving the tournament will be the fight of his life.

At its heart, The Karate Kid is a wonderful story about a teacher-student relationship that develops into a surrogate father-son bond. It is a superbly written (by screenwriter Christopher Murphey) example of a bond between two people in which each not only helps the other heal, but also soar to new heights of achievement and happiness.

The relationship between Dre and Mr. Han works so well because of the strong screen chemistry between Jaden Smith and Jackie Chan. Their performances make the characters’ actions and emotions seem authentic and sincere. They not only ground the story’s more fantastical moments, but they also give it a touch of goofy charm, which lightens the movie’s overall dark and sometimes edgy and grim atmosphere. Jaden has inherited his father, Will Smith’s cheeky cockiness, but the young actor seems like more of a natural talent, as if he doesn’t have to try as hard as his father.

In this film, Jackie Chan gives what is by far his best performance in an American production. Perhaps, I shouldn’t be surprised, but I am. Chan gives a complex, layered performance to create in Han, a complicated and inscrutable man. This is best exemplified in the scene in which Cheng’s Master Li (Rongguang Yu) and Mr. Han have a tense confrontation. Chan plays the scene with barely checked but mostly concealed fury. It is difficult to figure out what is going on in Mr. Han’s mind at that moment, and that’s the way Chan probably wanted it because it adds another layer of mystery to Han.

Fresh of the maligned Pink Panther 2, director Harald Swart has delivered a winner. This film, however, is as much a Chinese and American take on Rocky as it is a remake of The Karate Kid 1984, itself a teen, martial arts spin on 1976 Oscar winner for “Best Picture.” It is unsettling to see 12-year-olds beating each other up, as they do here, but The Karate Kid 2010 is excellent family entertainment. Its messages about setting goals and being open-minded and resilient make it even more of a winner.